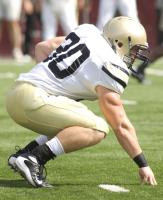 More than a week after the Black Knights’ season-ending contest with Navy, Army’s senior fullback was officially invited to participate in the East-West Shrine Game, to be played on Jan. 17, 2009, at John O’Quinn Field at Robertson Stadium on the campus of the University of Houston. The postseason all-star classic will be televised nationally by ESPN2 with kickoff set for 4 p.m. (EST).

Mooney, who became Army’s single season rushing leader with 1,339 ground yards this fall, will rank as the 23rd Army player to perform in the East-West Shrine Game. Long held on the West Coast, the game will return to Robertson Stadium for the second straight season.

Upon his arrival in Houston, Mooney will be greeted by a familiar face as former Army head coach Bobby Ross will serve as head coach for the East team this year. Mooney worked under Ross during his first two years at the Academy before Ross retired from active coaching following the 2006 campaign. Gene Stallings, meanwhile, will coach the West team.

One of Army’s four team captains, Mooney became the first Army player since Carlton Jones in 2003 to rush for at least 200 yards in a game twice this season. He also posted five 100-yard rushing efforts en route to surpassing Mike Mayweather’s previous single season school standard. Michael Wallace had been the most recent Army player to accomplish that feat, topping the century mark on five occasions in 2000. Mooney slipped past Mayweather atop Army’s single season rushing chart on the final play of the Navy game, besting the former standard established in 1990 by one yard.

The East-West Shrine Game has been played annually since 1925 to help raise money and awareness for Shriners Hospitals for Children, an international system of 22 pediatric specialty hospitals that provide care for children with orthopaedic conditions, burns, spinal cord injuries, and cleft lip and palate – all at no charge. To date, the game has helped raise more than $15 million and informed millions of people about the mission of this extraordinary philanthropy.