Photos: Provo High senior receives new prosthetic leg from Shriners
A Provo High senior recently received a new prosthetic leg from Shriners Children’s Hospital in Salt Lake City, the first of its kind to be used at the hospital, according to the family.
After months of appointments and fittings, Nicole Davis was given her new artificial limb -- a Unity Sleeveless Vacuum by Össur -- on Monday.
Born with defects caused by amniotic band syndrome, Davis has only eight fingers and wears a prosthetic leg below her right knee.
The new prosthetic leg is designed to improve socket fit, reduce fluctuations and enhance suspension, among other things. Known as an elevated vacuum system, it has a pump in the foot that sucks air out of the socket each time she takes a step. Doing so creates a vacuum, making a tighter, more comfortable seal.
It’s an upgrade from prosthetics she has had in the past, including ones that required an uncomfortable strap or that would periodically lose pressure and fall off, she said.
“The Shriners staff are amazing,” she said. “They have always listened and made sure my opinion was taken into account.”
A miracle baby, Davis was born 11 weeks early weighing only 2 lbs 8 ounces.
“My dad’s wedding ring could fit around my wrist,” she said.
Doctors were unsure she’d make it through the night, let alone be walking a little more than a year later, Davis said. But she was.
Around her first birthday, Davis was already pulling herself up and hopping along furniture. Because of that, her parents asked doctors to make her a prosthetic leg.
“The second they put it on me I ran out the door,” she said.
With a variety of artificial legs she’s had over the years, Davis has played soccer, basketball and ran multiple 5Ks. She credits her parents to helping her never let anything get in the way of her goals.
Davis’ friends describe her as outgoing, optimistic and inclusive; she’s always the one to include others, said Talia Adams, 17, who is also a senior at Provo High.
A childhood friend, Adams has watched Davis adjust and excel with each new prosthetic leg she’s received over the years.
“She doesn’t let anything hold her back,” Adams said.
Davis plays the ukulele, loves Harry Potter and hopes to study paleontology someday.
Posted by Unknown at 1:11 PM No comments: Links to this post

The 2014 Shriners Hospital for Children Gala & Golf Tournament on Sunday, October 26th (Gala) and Monday, October 27th (Golf Tournament) at Granite Bay Golf Club is coming up soon!  If you have already signed up and/or sent in a sponsorship thank you very much.  If you are planning to play and/or sponsoring and have not sent in your registration yet, please send it in as soon as possible so we can make all the proper preparations for the event.  If you know anyone you think might be interested in supporting this great cause, please feel free to forward them this email. We are expecting a full field of golfers this year so please make sure to get your registration in early.  If you're not a golfer, please come to the Gala to show your support.

Thanks to many of you, last year our 3rd Annual Gala & Golf Tournament to benefit the Shriners Hospital for Children Northern California was a tremendous success.  We have been able to raise just over $70,000 in three years!  We were able again to present the check to Shriners Hospital at their annual fundraiser appreciation gathering.

Many of you know that our second son, Spencer, was born in May of 2007 with club foot on both feet. Within being 1 week old, he was referred to by our pediatrician to the Shriners Hospital for Children. Luckily there is a Shriners Hospital right here in Sacramento. He was in casts on both feet for the first 6 months of his life. He has had 5 surgeries to help with the condition.  He is now 7 years old and unless someone told you he had gone through all of this you would not know when you see him. He runs and jumps just like any other 7 year old. Spencer will for the most part lead a normal life.

Our first son, Mitchell, was also born with mild Cerebral Palsy and has been a patient at Shriners receiving care and check ups. Last year Mitchell took part in a GAIT study to analyze his movements and assess how he could be helped further.  Almost a year ago Mitchell underwent corrective surgery on his left leg and foot to begin the corrective process for his CP.  Mitchell is scheduled to have another GAIT study in January to evaluate his progress.  If the doctors are happy with his progress, he will then have an assessment on his upper body and begin that corrective process.

The most amazing part is that Shriners Hospital does not determine patient care by ability to pay. No qualifying patient is refused. No family ever pays anything! Insurance companies do not determine the course of care, THE DOCTORS DO! The only place there is a cash register in the hospital is the cafeteria. I cannot place a value on it because I don't know, but I'm guessing the care Spencer and Mitchell have received between surgeries, prosthetic braces and regular visits adds up to well into the hundreds of thousands of dollars. As you can see, our family is forever grateful and indebted to the Shriners Hospital for Children and all their fantastic doctors and staff.

In order for the Shriner Hospital to be able to continue this mission they must be supported by fund raising. Attached is the flyer for our 2014 Gala & Golf Tournament at Granite Bay Golf Club to benefit the hospital.  Our goal is to raise over $50,000 for the hospital this year.  We ask for your support in any way you can whether it is participating in the golf tournament, a sponsorship or donation.

You can also visit www.golf4shriners.com for more information about the event and to register.  You can also visit our Golf4Shriners Facebook page to Like and Share.
Thank you!
Brad Cady, PGA
Head Golf Professional, Granite Bay Golf Club
Posted by Unknown at 9:58 PM No comments: Links to this post

Masonic barbecue fundraiser was a hit

The Masons of Yucaipa put on its popular 44th annual deep pit barbecue on Sunday, Sept. 28. The luncheon was open to the community and all were welcome to attend.
One hundred and ninety pounds of beef, 180 pounds of pork and 120 pounds of turkey were cooked up for the popular fundraiser. The tradition begins the night before and it’s no easy task. 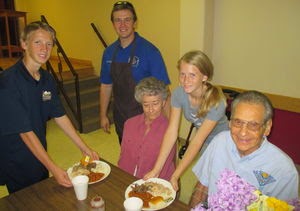 Hundreds of pounds of meat is covered in a dry rub and then placed in a cotton sock known as a butcher sock. The flavors penetrate the meat and after some time, each one is dipped in vinegar. Meanwhile the fire is made using only fruit wood, in the five by 10-foot brick pit in the backyard of the Masons Lounge.
The pit is five feet deep. Once the coals are ready the meat is placed in, covered with the heavy steel lids and wet sand covers the pit. The meat is then slow cooked for 12 hours. The barbecue sauce, baked beans and coleslaw are all homemade from scratch by Mason members.
“This was a good dinner and I ate everything,” said Ethel Duzmanovich. “The meat was nice and tender and it was a good time.”
The Masons and guests sang a special “Happy Birthday” song to Duzmanovich who happily celebrated her birthday at the lodge.
Yucaipa resident John Cash said it was his first time attending the barbecue.“It was excellent and they did a real good job,” he said.
For more information about the Masons, visit www.2b1ask­1.info.
Posted by Unknown at 11:18 AM No comments: Links to this post

Oldest Shrine Clown, Will Live in our Hearts 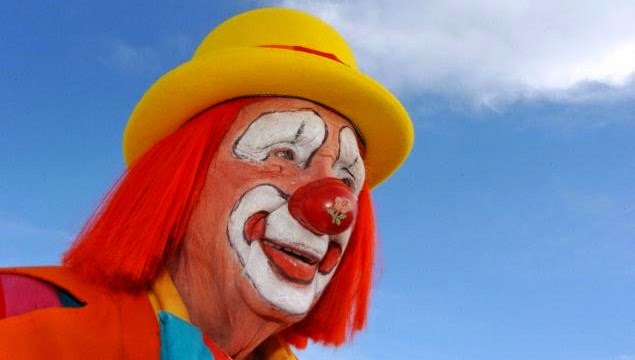 Smiles can sometimes be a hard thing to pass, send or receive in life. But for one Billings, Montana man, it came as naturally as breathing. Floyd Creekmore, known as Creeky the Clown is being mourned across the nation following his death at the age of 98, this past Saturday. His son Dave Creekmore said his father passed away in his home after suffering complications from heart disease. In the 80s, Creeky turned in his cowboy status and became a clown bringing smiles to sick children hospitalized, as a member of the Shriners.
Even as a child, Creeky looked forward going to the circus so he can ask the clowns about their act and face paint. The dedicated and “Oldest Performing Clown” earned a notable mention in the Guinness World Records two years ago.
That same year Creeky hung up his charming, big, nose after losing his bride of more than 70 years. His son shared following the passing of his mother, his father “continued to attend Shriners’ clown meetings,” but he never fully stepped into the clown role again. Fellow clowns shared stories regarding a man they considered more than the longest performing clown, they considered him a mentor and friend.
Over his illustrious career as a clown, Creeky earned an honor from the International Shrine Clown Association, for Clown of the year, atop of endless admiration from those who encountered the spirited and spontaneous man behind the makeup.
In August, Creeky’s health begun to suffer and he was hospitalized with an intestinal infection. While he was released at a later date, it was a condition he would not fully recover from.
Dave shared with the media his father had a genuine desire to make people smile and happy, “he had a passion,” he said.
Not too many people can say they do what they love. For Creeky the Clown, his entire life embarked on an adventure of warmth, happiness and laughs. May he rest in the same peace he gave so many other others.
http://www.viralglobalnews.com/u-s-stories/shriner-floyd-creeky-creekmore-oldest-clown-in-the-world-dies-in-montana/18231/

Posted by Unknown at 12:40 PM No comments: Links to this post