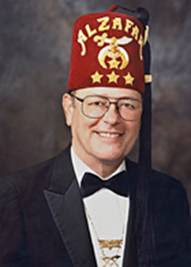 McGuire was serving his tenth year as a member of the Boards of Directors for Shriners International and Shriners Hospitals for Children. McGuire was re-elected in 2008 during the Shriners’ annual Imperial Council Session. As Deputy Imperial Potentate, he was a part of the 13-member body that helps govern the Shriners fraternity. He was also an emeritus member of the Houston Shriners Hospital Board of Governors and treasurer and chairman of the Finance Committee.

McGuire was raised a Master Mason in 1959 and was a member of Triune Lodge #15. He was Past Potentate of Alzafar Shriners and served as president of the Mounted Horse Patrol. He served as District Deputy Grand Master in 2000 and was a member of the Scottish Rite and York Rite bodies. For the last 25 years, McGuire served as a representative to the Imperial Council. He also served as chairman of the Dispensations and Charters Committee, and as vice-chairman of the Imperial Marshal Aides Committee.

McGuire was director of marketing and facility planner for one of the oldest and largest architectural firms in San Antonio, specializing in education and health care facilities. Previously, he spent 28 years in public school administration, where he was assistant superintendent for the eighth-largest school district in Texas. McGuire served as a board member of the Northwest YMCA; was a member of the San Antonio Executive Association and the Harp and Shamrock Society; and a life-member of the San Antonio Livestock Association.

Funeral arrangements are pending.
Posted by Unknown at 9:58 AM