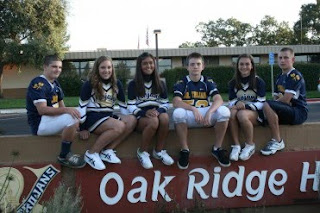 Midget cheerleaders Bailey Geyer, Hannah Vicario, and Courtney Callaway were nominated based upon their hard work and strong values. The girls are also considerate, compassionate and have outstanding leadership skills.

Considered role models amongst their peers and great athletes, students and citizens by their coaches, playing in the East-West Shrine Bowl is an honor.

Each youth football and cheer team in the Sacramento region (there are over 30 teams -- from Colfax to West Sacramento, to Granite Bay, Rocklin, Sacramento and El Dorado Hills) nominates one to three players and cheerleaders to participate in the Shrine Bowl.

The Shrine Bowl is a fundraiser for the Sacramento Shriner’s Hospital for Children and the Sierra Youth Football program. Each cheerleader and football player is required to raise money to support the Shriner’s Hospital and take a tour of the hospital to educate themselves on what and whom they are playing and cheerleading for.

The Jr. Trojans organization, friends, family, and the community of El Dorado Hills wish to congratulate Bailey, Hannah, Courtney, Kyler, Colton, and Josh.
Posted by Unknown at 9:35 AM