Mesquite,Ut. resident to bike across country for Shriners 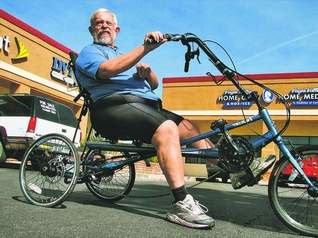 MESQUITE - At 60, Jim Francis has decided to take a laid-back approach - by cycling across the country.

The Mesquite resident will be laid back in the sense that he rides a recumbent three-wheel velocipede. He hesitates to call it a tricycle because it's no toy - he rides it 30 to 40 miles a day as part of his regimen in preparation for his cross-country trip.

His long-time friend, Willard White, asked Francis to join him in cycling across the country to raise funds for Shriners Hospitals for Children. The Whites adopted two special-needs children from Bolivia and one from the eastern U.S. All three required extensive medical treatment, which was covered by the Shriners.

When the Whites adopted the children, they couldn't walk. Now, "between Heavenly Father and Shriners, both are walking well," Francis said.

Although Francis has been cycling for years - he used to enter long-distance races - he has undergone three knee replacements and two back surgeries, which is why he can't ride a conventional bicycle. When White approached him about the cross-country trip, Francis knew he had a weight problem.

"I thought, 'There's no way I can do this,'" Francis said, but he finally accepted.

Before he took up cycling, he weighed 300 pounds, and worked his way down to 170 pounds.

In six months, he lost 70 pounds, and hopes to lose 20 or 30 more pounds before he leaves on his trip.

"I'll probably lose another 25 pounds on the road," he said. "That's a lot of pedaling."

He and White, along with a high school junior from Kaysville, will embark on their 3,380-mile trip from Coos Bay, Ore., on May 28. They hope to be at the Statue of Liberty on Aug. 11.

Along the way, they will speak to groups and individuals to raise funds for their expenses and for the Shriners. People across the country have offered to put the cyclists up along the way, and Francis has arranged to speak to groups, including an encampment of 1,000 Boy Scouts in Omaha, Neb.

Francis said he wants to share the message that "there's still a God and Heavenly Father loves his children."

He plans to take at least 200 copies of the Book of Mormon with testimonies from various members of The Church of Jesus Christ of Latter-day Saints to hand out along the way.

Although his doctors say he only has a 10 percent chance of being able to finish the trip, Francis said he is confident he will make it.

"No matter what the doctors say," he said, "I will make it."

Go to www.inspirationroad.com for more information. Donations can be made at Mountain America Credit Union to "Inspiration Road."

Specialty Publications Editor Rachel Glidden contributed to this story.
Posted by Unknown at 11:58 AM