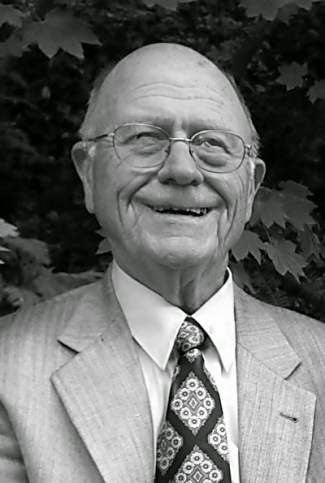 Ernie leaves a legacy of gracious generosity, kind-heartedness, selflessness, loyalty and commitment - a true servant of God. His was happiest around family and friends to share good times, extend encouragement, provide support, create new memories and share stories. He was very proud of his Swedish heritage and roots in Iron River, Michigan, especially Sunset Lake.
Ernie graduated from Iron River High School in 1944. He married Elsie Mae on June 18, 1955 in Kingston Minnesota. He served in the Army Air Corps as a Communication Specialist from November 1943 to October 1946 and was stationed in the Philippines. Upon discharge, he returned to Iron River and began his career with the M.A. Hanna Mining Company, working in iron ore mines until moving to Myrtle Creek, Oregon in 1969 to finish his career mining nickel. After 36 years with the same company, he retired, but continued mining through his stories and reminiscing with family and friends.
Ernie was a member of Faith Evangelical Lutheran Church in Roseburg for 45 years, serving in many capacities including church council member and president, stewardship chair and visiting Eucharistic minister. He was highly committed to a personal ministry of visiting friends and others in need, particularly those home bound, in care centers or needing the support of a listening ear and a story or two.
Ernie’s sense of loyalty and commitment was also felt through his many years of work with various Masonic organizations. He began lodge work in Iron River and was a current member of Maple Lodge #127 in Riddle at the time of his death. He served as Worshipful Master twice during his years as a Mason. He was a member of Valentine Chapter #98 and Oregon Chapter #57 - Order of the Eastern Star, serving as Worthy Patron five times. He was also a member of the Scottish Rite, the Hillah Temple and the Roseburg Shriners Club. Ernie was well known throughout the county for his passion supporting the Shriners Hospital for Children, committing much of his time raising money so that children could receive the hospital’s care. Oregon Job’s Daughters also benefitted from his love for youth; he served as Grand Associate Guardian in 1979-80.
Ernie was pre-deceased by his father (1945), mother (1974) and brothers Bob (2006) and Clyde (1961). He is survived by his loving wife of 59 years, Elsie (Ruotsinoja); two daughters, Gwen Soderberg-Chase (Randy) and Maribeth Soderberg; five grandchildren, Jonathon Soderberg (Yoko), Collin Soderberg-Chase, Dustin Whitaker (Erin), Mallory Whitaker Stephens (Josh) and Kristin Bailey Dodge; and seven great-grandchildren, Lucia, Malachai, Peter, Chloe, Dottie, Trevor and Kareena. Many nieces and nephews also survive as well as countless friends.
Ernie was a wonderful gift from God and a powerful witness to the gospel of goodness and grace to so many people. His physical presence will be deeply missed, but the true essence of who he was will be forever in our hearts.
A Masonic and Eastern Star Memorial Services will be held on August 8, 2014 at 2:00p.m. at the Laurel Masonic Lodge, Roseburg, (public is invited). A celebration of life will be held on August 9, 2014 at 11:00a.m. at Faith Lutheran Church, Interment will be at Roseburg Memorial Cemetary. Memorial Contributions may be made to www.shrinershospitalfor children.org - Donations: Personal fundraising - Ernest Soderberg Memorial or Faith Lutheran Church, Roseburg, Oregon. Taylor’s Family Mortuary is in charge of the arrangements.
Posted by Unknown at 12:00 PM