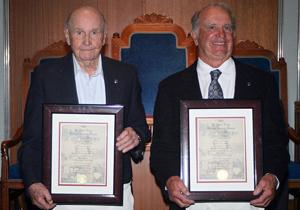 
On Nov. 6, brothers Joseph and Norman Maley were each presented with a Golden Veteran Award to commemorate their 50 years as a member of the Masonic fraternity. The brothers became Master Masons on the same day in November 1964. A dinner was hosted by Lodi Lodge F. & A.M. in their honor prior to the presentation ceremony. The dinner was attended by over 50 family, friends, and lodge members.
The Masonic fraternity is entwined in both of their lives. Their grandfather, Joe Maley, was a member of Woodbridge lodge F. & A.M. Their father, “Bud” Maley, was a member of Lodi Lodge and their mother a member of the Rainbow Girls as was Joe’s sister Betty and Lou’s sister Cindy.


Joe’s father-in-law, Tom Fuller, was the Master of Manteca Lodge, and an uncle, Richard Lang, was a 33 degree Scottish Rite in San Jose.
The brothers, Norman “Lou” Maley and brother Joseph “Joe” Maley were both born in the Lodi area, and are descendents of early settlers. The ancestral home, built by great-great grandfather Andrew Hashner, who came to the Lodi area in the late 1860’s, still stands on Turner Road near DeVries Road. Both brothers attended local schools, and except for time spent at U.C. Davis and their military service (Joe-national guard and Lou-Navy) they have stayed close to Lodi’s farming community raising cattle, tomatoes and grapes. They established what is now the Maley Brothers Winery in the mid-1980’s, one of the earlier wineries in the Lodi area which is now being operated by Todd Maley, Joe’s son.
The Maley brothers have both been active in the local community: Joe helping to found Tokay Savings and Loan, member of the California Association of Wine Grape Growers, California Farm Bureau and Delta Sigma Phi to name a few, and brother Lou has been active in the Turner School District, Woodbridge Vineyard Association, Woodbridge Fire Department, and American Legion, also just to name a few.
Both brothers have large families in the area: Lou–a daughter, three grand children and two (soon to be three) great granddaughters. Joe: a son and a daughter, three grandsons, and two grand daughters. (A last note on Lou Maley: he is said to make great homemade pickles and olives.)
— Source: Dan Moellenbernd
t
Posted by Unknown at 1:29 PM