Balloon Carousel by Richard Gaines  Posted on May 21, 2015 by clownantics 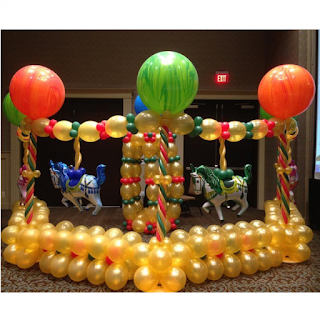 When we first saw the entry, we were instantly impressed. According to Richard, he used over 600 Qualitex balloons and the sculpture measures 16 feet accross and 10 feet tall! It also took him 36 hours which made this Richard’s largest creation to date! Not to mention the other sculptures he did for the event such as the 8-foot balloon clowns and 4 balloon columns for the room. The collection of sculptures amount to more than 1200 balloons!
According to Richard…
“The inspiration for the balloon carousel came as a secret project for our Shrine Temple. Since there was a national fair convention setting up in town, and one of our Shrine Officers was to do a speech with our involvement in the Michigan State Fair to this convention, he had asked me to put up a display to showcase the talent and commitment our fine fraternity. I had never put together a project of that size, but he was persistent and felt I could do this. “
The Man Behind the Carousel
Richard Gaines has been balloon twisting since August 2013. While he considers himself a “late-bloomer” we think that he’s got a talent on twisting balloons.
He became a Moslem clown on February 2013 and has been inspired of it ever since. He even told us about a 6-year old girl who took her first steps towards him when he did a surprise visit to the hospital as a clown.
Posted by Unknown at 12:02 PM