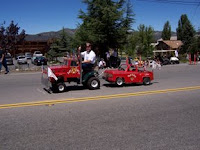 The Local Charter Cable TV has been using the Apple Valley Shrine Club Trucks from last years parade as part of their advertisement for the Apple Vally Days.

The trucks are have also been shown at least 4 times on the Chinese Channel after they did the Pasadena Chinese New Years Parade this year.
This Shrine Club has been one of the most active car groups at Al Malaikah They do around 30+ parades a year.
They have just adding the Banning Parade to their list for October.
Posted by Unknown at 11:07 AM

Good Afternoon...
I happened upon your website and thought you might be able to help us. We are looking for a go kart that is designed as a Dodge Lil Red Express truck. (1978 - 1979) We saw an article in Car and Driver that the Shriners were driving some of these and since I am a Lil Red Express Collector, I thought one would make a great addition to my collection. I am also a Silver, Diamond, and Platinum sponsor for the Yaarab Circus with the Bankhead Shriners here in Georgia.
Thank you in advance for your help.
Jim
brccons@bellsouth.net

Gentlemen,
My names is Tim Browm with a media company called In the News,Inc.

The contact info I have for you is poor. We make the preserved display "keepsake" copies of the national magazine and newspaper articles, that you see at the car shows and corp office/boardrooms.

Would the Temple or any of the owners like a display copy of the new Car&Driver article?

Contact me with questions and forward this info to any owner/members.
Tim Brown
1-800-548-3993/Tampa Florida