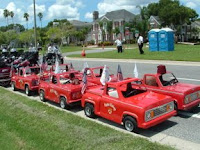 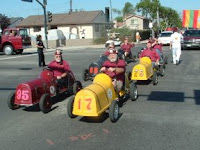 Shriners from Apple Valley, Corona and Los Nietos Shrine Clubs unloaded their mini-cars at Willow Springs raceway this week.
They were there to put their shrine parade cars though a battery of tests just like the big cars do for a car magazine(to be named at a later date. So keep reading this blog).

The Nobles(and some of their wives)arrived about 9:30am and put in a full day running their cars and getting their pictures taken(even the ugly cars). It was a long day the final pictures were shot about 6:30pm.

It was hoped that everyone had some fun, we won't know who we will see in the magazine for a few months. At the time of publication I will list everyone that was there that day.
Posted by Unknown at 9:55 PM