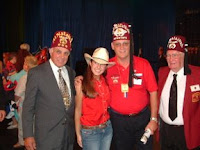 JACKSONVILLE, Fla., -- Justin Timberlake, former Mickey Mouse Club and 'N Sync member, is going to be the host for a PGA tournament in Las Vegas in 2008.

Joining the ranks of entertainers such as Frank Sinatra, Bob Hope and Diana Shore, the former boy band performer will see his name go up as the Justin Timberlake Shriners Hospitals for Children Open. Is it to be played Oct. 13-19 at TPC Summerlin in Las Vegas.

"His star power is going to make an already fantastic tournament even better," Katie Walker, 18, a former Shriners patient and an ambassador for the tournament, said in a release, "and I know that can only help the Shriners impact more lives like mine."

Justin Timberlake will become only the 14th celebrity to host an official tournament for the Professional Golf Association.

An avid golfer, as part of his involvement, the pop star will will play in a celebrity pro-am event in Las Vegas,and host a concert during tournament week which will benefit Shriners Hospital for Children.

Timberlake's challenge will be named the Justin Timberlake Shriners Hospitals for Children Open.

He says, "I couldn't be more excited. ... Raising money to better children's lives while playing golf? I can't think of a better way to pass the time."
Posted by Unknown at 3:58 PM