Motorcyclists know importance of a ride 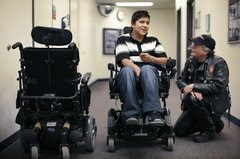 by Tom Hallman Jr., The Oregonian
Thursday November 06, 2008, 4:00 AM
Motoya Nakamura/The OregonianJose Adan Guardado, 14, was among kids at Portland Shriners Hospital for Children to receive a wheelchair last month, thanks to money raised by local bikers.

Art West is a rough-and-tough kind of guy who's belonged to a motorcycle club for 35 years. But under his leather vest, he hides a soft spot for sick kids.

For the past several weeks, the 57-year-old has been making phone calls, printing fliers and lining up sponsors for a Nov. 8 concert to raise money to buy expensive wheelchairs for children being treated at Portland Shriners Hospital for Children.

"The short version of why I do this is that my wife and I never had any kids," says West, a member of Brothers Speed MC, one of the Northwest's largest motorcycle clubs. "This is a way we can help."

The idea traces to 1994, when the band's drummer had a child being treated at Shriners. He told Art West how impressed he was with Portland bikers' support of the hospital. For 28 years, as many as 1,500 bikers have met in December to wind through the city and deliver loads of toys for Shriners patients.

"The drummer said he wished there was something he could do to help as a musician," Art West says. "I thought we could put on a gig as a band and raise money. We got $600 that night."

The event ran for three years, until Francine West took a break from the stage. She returned three years ago, and so did the benefit. The musicians donate their time, and the $5 admission goes toward buying wheelchairs. Last year's show raised $5,000, Art West says.

Tina Huber, who met West through Brothers Speed, says she always attends the show. "My son went to Shriners from the time he was born," Huber says. "He had terrible problems with his legs. They took care of my child, and I didn't pay a dime. My son's married, has a son and a job and can walk. Shriners gave him a life."

West turns the money over to Abate of Oregon, a motorcycle-rights group formed in the 1970s. Mike Friend, who coordinated last year's Toy Run and is Abate's chaplain, says the organization has 2,000 members across Oregon.

"When it first started, most of the members were the real bikers, the so-called 1-percenters," Friend says. "They're still involved, but mostly it's just your average Joe motorcycle rider."

Early on, Friend says, Portland-area bikers had a bad image. Someone in Abate had the idea to change perceptions by doing something for kids.

Toy Run: Public welcome. Riders will start gathering about 10 a.m. Dec. 6 at the TriMet parking lot at 4012 S.E. 17th Ave. Tickets for a chance to win a Harley-Davidson, $10, will be sold there. The drawing will be at noon, and the ride to deliver toys to the Portland Shriners Hospital for Children will begin at 12:30 p.m.

"A handful of bikers in Portland thought they'd get some toys and take them to a hospital for kids," Friend says. "Hospitals turned them down. They figured they stole the toys. Or they said they could bring the toys around to the back door. The Shriners welcomed the group with open arms. We've been with them ever since."

The group raffles off a Harley-Davidson each year, selling tickets at $10 each and announcing the winner at the Toy Run. That money, too, benefits Shriners.

"The bikers fill a need," says Kay Weber, a Shriners spokeswoman. "Some of these wheelchairs can cost more than $10,000. The kids who receive these chairs are from families who have maxed out their lifetime insurance for medical equipment, have no insurance or just can't make ends meet."

"The bikers are so cute," Weber says. "You see them come in all tough looking. Then the therapist talks about the child and why the chair will change their life. You turn around, and all the bikers are wiping their eyes. It's very sweet, and melts your heart."

--Tom Hallman Jr.; tomhallman@news.oregonian.com
Posted by Unknown at 8:39 AM