Threads of love for Shriners Hospital for Children Salt Lake 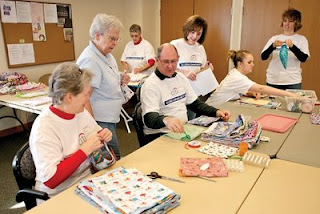 RIVERDALE -- Volunteering at the Riverdale senior center has kept Lois Davis from locking herself in her house.

"When I retired (as a cook at Canyon View Elementary), I decided I'm going to sit and relax a while. When I realized I didn't even want the doorbell to ring because I didn't want to be bothered, I knew I needed to get out of the house. Staying home wasn't what I wanted," she said.

Now Davis spends almost as much time at the senior center as she does at home. For her latest project, Davis brought her work home with her, as she helped cut fabric for 410 admission bags for Shriners Hospital, so they would be ready for seniors to sew and donate to the hospital to fill with toiletries and toys for their patients.

Mike Babcock is the public relations director for Salt Lake City Shriners Hospital. He said the hospital needs about 1,300 bags each year for children who come for surgery.

"It's the first thing a child gets and helps set the tone. It puts them at ease and comforts them right off the bat," he said.

The seniors got the bags done with some help from employees of Citibank in Layton and their family members. Peggy Smith said each year Citi employees are encouraged to reach out to the community on Global Volunteer Day.

"If we don't support our seniors, where are we going to be?" Sandy Vaughan said, explaining why she chose to support this project.

Volunteers pitched in for any number of reasons.

Seventeen-year-old Storee Nelson said she came with her mom because she needs service hours for clubs at school.

Senior Diane Wilson said she comes for the friendship. "There's lots of nice people over here," she said.

Ona Johnston said what's being served to eat usually determines whether she's at the center, but this time she chose to be there to work on the bags because, "They asked for help, so I came."

Davis said seniors at the center are often busy with service projects, and many others contributed by donating money for fabric or stuffed animals to put in the bags.

"They were really good about stuffed animals," Davis said, "They donated a lot of them."
Posted by Unknown at 10:50 AM