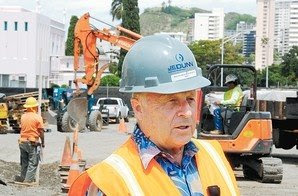 The economic crisis has forced Shriners Hospitals for Children to lay off 10 people at its Honolulu facility and has officials increasingly worried about the prospect of raising $3 million in donations for the completion of its new state-of-the-art hospital on Punahou Street.

The 10 employees laid off in Honolulu included at least one doctor and several nurses.

The news comes as Shriners is considering closing six hospitals on the Mainland because of the economic downturn. Ralph Semb, president and chief executive officer of the Shriners board of trustees, who was in Honolulu yesterday to oversee progress at the Punahou hospital, said the Honolulu layoffs are part of a number of cost-saving measures being taken nationwide to help Shriners stay afloat.

In recent months, the organization has seen its $8 billion endowment dwindle to about $5 billion.

The endowment is the largest source of money to pay for operations and care at 22 Shriners hospitals in the United States, Canada and Mexico. The principal of the endowment cannot be touched.

"The economic downturn has certainly affected us," Semb said.

Still, Semb said, construction of the new Honolulu facility will go on as planned.

Shriners has committed $59 million toward building the new hospital, which will include new operating rooms, family quarters and inpatient beds, along with state-of-the-art equipment and recreation areas. The rest of the construction funds — about $14 million — are supposed to come from donations.

So far, Shriners has raised $11 million from businesses, foundations and the public and needs $3 million more — likely before the end of the year — to keep construction of the Punahou facility on track.

Iwalani Obrey Dayton, Shriners Honolulu director of development, said officials are optimistic they'll achieve their goal. But they're concerned that it might take them longer to reach it, which could push back the completion of work. "People are being a lot more conservative (with giving)," Dayton said, adding she has already seen donations drop off because of the economic crisis. "Are we worried? Yeah."

The hospital is scheduled to be completed in May 2010.

Construction of the $73 million facility kicked off a year ago, and one of the buildings — which will house medical offices and operating rooms — is nearly complete. A blessing ceremony for the building is set for May 28. While construction is under way, operations are conducted in a medical trailer.

Shriners Honolulu, which opened in 1923 in Liliha and moved to its present site in 1930, provides orthopedic surgical and rehabilitation care to children up to age 18 at no cost, regardless of parents' ability to pay. The hospital sees about 600 new patients a year, about 80 percent of whom are from the Islands. The rest come from all over the Pacific, including from Guam and Micronesia.

The facility gets about $16 million in operating money from the Shriners endowment.

Reach Mary Vorsino at mvorsino@honoluluadvertiser.com.
Posted by Unknown at 10:01 AM