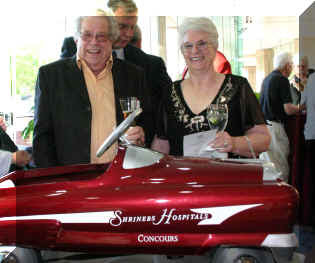 Butch Wright was born in Texas. In the 1970’s Butch,his wife Shirley and their three sons moved to Fresno, California. That relocation proved to be a California advantage!

During his teen-age years an automobile came into Butch’s life; his first car – a 1939 Pontiac. General Motors in those days equipped Pontiacs with flat-head engines of either six or eight cylinders. Ask Butch; he’ll know. Butch gave the Pontiac many hours of loving care in the form of polishing and maintenance.

One car led to another and another. He had lots of them he says, including a 1959 MG. The MG is the car that fostered his love for British automobiles. Butch bought his first Jaguar,a 1959 XK 150-S roadster in 1986. It was a ‘keeper’and he still owns it!

Butch’s passion for fine cars compelled him to join the Sports Car Club of America Concours judging team in 1980.
He has served in the capacity of SCCA Chief Judge for the past 12 years and describes the experience as having been a pleasure.

As Chief Judge it’s been Butch’s duty to place SCCA judges into classes
requiring specific expertise to properly carry out the judging duties.

Knowing that judges are knowledgeable and well placed ensures entrants their automobiles will be judged by those well qualified to make such determinations.

Shriners Hospital Concours d’Elegance proudly celebrates Butch Wright as its
Grand Marshal for 2009!
Posted by Unknown at 11:12 AM