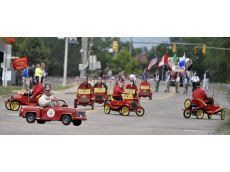 There’s nothing like a Shriners parade to bring a shot of silliness to an ordinary Saturday.

That’s what happens when about 2,500 Shriners from seven states get together for a convention.

The Central States Shrine Association met in Colorado Springs, and chose Fountain for a parade site to show off their stuff, otherwise known as “fun with a purpose.”

“I like how happy everybody is,” said Chantelle Strande, 15. “It brings the town together.”

It wasn’t a parade like Jenna Razzkowski, 11, was used to seeing clamor down the streets of her bedroom community.

“It’s a bunch of old people,” she observed, amused by the antics. “In some really old cars,” added Taylor Medeiros, 9,, who liked the mini-mobiles. “I could drive them.”

The Shriners would love to get him in the driver’s seat someday. Numbers have dwindled in the philanthropic organization that’s known for supporting pediatric healthcare. Many members are over 60. Sons aren’t following their dads into the red fez society.

Carl Jennings was among the few in the parade with hair that wasn’t gray or rainbow colored. A friend recruited the 39-year-old electrician from Missouri to the Keystone Cops Shrine unit five years ago.

“We’re all big kids,” Jennings said. “We normally have a big ambulance and throw water at people, but we couldn’t bring it all this way.”

So, they made do. “We beat up the convict,” he said, “and then he knocks us down and we all act silly.”

Only men are allowed to be in the parade. The “bad girls,” as the ladies in red are known, were relegated to the sidewalk. Still, they got the nod. Make that, lots of nods — and winks and approving glances as the trigger-happy matrons shot their cap guns at men in convertibles.

“It’s a blast,” said “Bad Girl” Kay Baldi, a Shriner’s wife. “Life is short and you’ve got to make the best of it, and if you can help someone along the way, that’s all we’re trying to do.”

When Maynard Boehler isn’t wearing his blue wig, red lipstick and “Glitz the clown” duds, he’s driving kids from the Ohama region to hospitals for medical care in Minneapolis.

The 22 Shriners Hospitals for Children nationwide provide free treatment to children with orthopedic conditions, burns, spinal cord injuries and cleft lip/palate. A screening clinic is held the second Saturday of the month at the Colorado Springs Shrine Club, 6 South 33rd Street.
Posted by Unknown at 11:04 AM