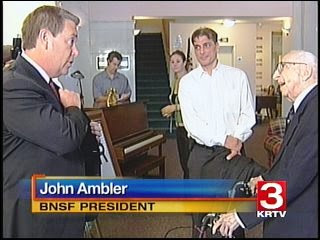 Through 112 years, Great Falls resident Walter Breuning has seen just about everything - but even Walter was surprised by the generosity shown today by his former employer, as the president of the BNSF Railway presented Breuning with a check for $50,000.

John Ambler, president of BNSF, said, "We, in honor of your service, would like to give a check for you to give to them for $50,000." The "them" is the Shriners Hospital, an organization that Walter has been part of for over 60 years.

Walter replied, "They sure can use the money."

Shriners say the donation is greatly appreciated, and will go to great use. Great Falls Shriners Hospital coordinator Richard Aspinwall said, "The children, when they go to the hospital, everything there is free but we have to get the children to the hospital, and so this money will assist."

But Walter's recognition from BNSF Railway didn't stop at just the donation. He was also given a top honor for his 50 years of service to the Great Northern Railway, the company's predecessor.

Ambler continued, "We were able to name a station for Walter - it's the Walter Station just about 30 miles outside of Billings, and this is a new track. It's a great honor to have something named for you."

Walter says he was flattered by the dedication, and excited to help the charity that he's worked with for over 60 years.

Walter said, "That is quite an honor. It's the first time that I remember the railroad ever giving any money to anything for anybody. I think that's quite a wonderful thing that they make a donation to the Shriners."

Although Walter is the one honored today, it seems he's the one who's given the bigger gift.

And Ambler said, "He embodies the spirit of what we would hope to have in our own people, and our history."

Walter was named the oldest man in the world in June; he will celebrates his 113th birthday on September 21st.
Posted by Unknown at 9:41 AM