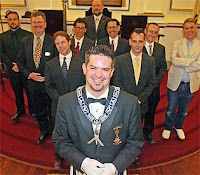 By David Wedge, Boston Herald
Stodgy lodges, traditional initiations and secret handshakes would seem to be the antithesis of punk rock.

But a diverse group of Hub rockers are embracing centuries-old fraternal ideals to become the new face of the Freemasons in Boston.

“It’s not a religion, and it’s definitely not a cult,” said J.R. Roach, drummer for Sam Black Church and bassist for The Men, who also is master of the Masons’ Cambridge Amicable Lodge. “Everything is supposed to be dignified. There’s no hazing. We’re all brothers. It’s a movement for guys trying to find a deeper meaning in their lives.”

A new breed of Freemasons has surfaced locally, filling seats occupied for decades by community leaders, politicians and executives. Some join because their fathers or grandfathers were Masons. Others come for the male camaraderie or the intellectual challenge. And some simply want to get out of the house and go somewhere other than a rock club.

“It’s kind of like a history class that no one else can take,” said Dave Norton, drummer for Victory at Sea and The Men. He believes his membership in the fraternal organization will be especially rewarding when he tours Europe later this year.

“I can go anywhere in the world and find a brother,” he said.

According to the organization’s Web site, “Freemasonry is the oldest and largest fraternity dedicated to the brotherhood of man under the fatherhood of a supreme being. Although of a religious nature, Freemasonry is not a religion. It urges members to be faithful and devoted to their own religious beliefs.” Its slogan is “making good men better.”

Masons have numbered artists as well as presidents, governors, judges and businessmen for centuries. Famous members include actors Clark Gable and Ernest Borgnine and musicians such as Mozart, Irving Berlin, Nat King Cole and Duke Ellington.

Masonry does have its critics who claim it is a secretive, chauvinistic and cult-like organization seeking no less than world domination. It’s been denounced by the Catholic Church and other religions and has faced political opposition for centuries.

“Some people just aren’t ready for it,” Norton said. “Any man can join. You just have to have the right reasons for it.”

Inside the Cambridge lodge, with its candelabras, velvet-covered pews, pipe organ and paintings of members past, members wear aprons indicating their level of enlightenment. Members meet monthly to discuss lodge business, which ranges from raising money for charities to electing leaders.

Gary Robley, drummer for Dashboard Jesus and J. Geils cover band Blow Your Face Out, said he joined because his father was a Mason, as are many of his friends.

“There were a bunch of musicians I knew in it,” Robley said. “It was kind of a brotherhood. Musicians have always been a part of Masonry since its inception.”

For Hank Peirce, a Unitarian minister and former roadie for hardcore band Slapshot, Masonry provided a safe haven when he went through a divorce.

“It’s important to have ‘men space,’ where we can talk about things going on in our lives,” he said. “The lodge is a sanctuary. When you’re here, you’re doing rituals that men have done for hundreds of years.”

We posted the story from the LA Times on the new Masons and only thought it would be right to let you know that it happening all around the country. You had better brush up on your masonic knowledge these you men are going to be asking. The secret is getting out that it is great to be a Freemason. If you liked the stories please go to the papers web site and let them and the writer and us know! .
Posted by Unknown at 10:56 AM

1/ It has it's own unique teachings on god and man

Thousands of christian men have left it in the US and elsewhere since the 1980's because they realise now it conflicts with the claims of Jesus - and they'd rather follow Him.

These rocking lads in the article might like to talk to Keith Richards, Bruce Springsteen, Sly Stallone, Denzel Washington and other high profile converts to Christianity..
bless you all,
St. Tim

Err... wrong Tim.
Masons would have to think of it as such for it to be considered a religion. This is a necessary premise for any/all religions.

1/ Unique teachings on man? Yes. But, you could say that about Men's Journal or multiple publications. Teachings on God? Nothing unique, strictly scriptural in nature.

2/ Any self respecting biblical scholar knows this name. It is not a secret. Do your homework.

3/ All ceremonial prayers are biblical quotes. Once again, do your homework. All Masons know the histories to be allegorical. Can you think of anyone else who taught in this manner? You mention him in your comments... There is no claim in ANY Masonic body that it is a way to heaven.

MILLIONS of men have left the Christian faith for a multitude of reasons. That is no basis for Masons to slander Christianity. We would never do so. Most Masons do follow Him.

I'd think again before using Sly or Keith Richards as a spiritual reference.

Finally, neither Jesus nor the holy scriptures make reference to the term "Saint" or it's abbreviation "St.", and it is sanctimonious to refer to one's self as such. This is something no Mason would ever do.

Hi Mr Gower,
I guess you are a low ranking Mason then..

There have been lots of Masons who regard it as a religion.. and it has all the traits - you say it's not but that doesn't change the facts.

2/ Any self respecting biblical scholar would not use the name "Jahbulon" for god! It has been explained as Jah = Jehovah + Bul = Baal + On for Osiris the Egyptian god .. thats heretical to put those enemies together.
Of course lots of Masons, perhaps yourself, don't get high enough
(18th)in the Degrees to know about that.

3/ The prayers.. well according to "The Lost Keys of Freemasonry" by an extreemly high masonic leader the Mason, once he has properly learned to apply the dynamo of living power, has the seething energies of Lucifer in his hands ! So who are you praying to ??!
Oh and yes Jesus used parables, but he didn't dress them as history.. many of your guys seem to think the Temple/Hiram Abiff story is in the Bible.. they also think Freemasonry is much older than the fraternities of middle-age builders it grew from.

Yes there are references to ascending to the Grand Lodge Above.

I wouldn't deny there are ups and downs in numbers of Christians - but it's up generally and Ministers in Masonry are way down.. that's all I said.

I'm always happy to hear of wayward famous people showing an interest in Jesus - just pointed a few out, that's all.

'Saint' is used 69 times in the Scriptures .. do your homework friend (I don't mean to be nasty - I'm liking you for replying!).
It has been used throughout church history too but sadly has been associated with dead people!
A Saint is anyone who follows Christ (accepted His sacrifice for their sin on the cross, then trying to live a Christ-like life with the help of God's Spirit)
so any Christians can call themselves 'Saints' if they want.. I only do it occasionally to make this very point.
Sorry if that offends you - I want to help.