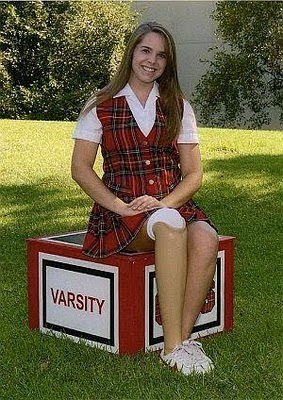 By Richard Irwin Staff Writer
Cady Tescher, 18, of Glendora will receive a $1,000 scholarship from the Amputee Coalition of America at its gala dinner in Irvine on Aug. 28. (Photo courtesy of Cady Tescher)

What's your disability? Everyone has one. The question is how you've dealt with this physical or mental disability to reach your full potential.

It's safe to say that Cady Tescher of Glendora has handled hers well. On Aug. 28, the Amputee Coalition of America will honor the 18-year-old with a $1,000 scholarship at their annual conference.

"Not only has she excelled academically, but Cady is a remarkable young woman who has dedicated her life to helping others," noted Kandra Calhoun, president of the coalition. "She regularly visits children in the hospital who are facing amputation, and she serves as a role model for her peers."

But if you talk to Cady and her family, you'll find a typical teen trying to lead a typical life in Glendora. The effervescent young woman doesn't let her disability hold her back. With the full support of parents, Cady pursues her passions without a second thought.

The local honors student was born with a congenital limb difference that resulted in her right leg being amputated below the knee when she was only 8 months old. Cady received her first artificial leg from Shriners Hospital for Children in Los Angeles before she even learned to walk.

While some parents might have become overprotective, the Calhouns decided to take another approach.

"We encouraged Cady to be outgoing and not be shy. If she wanted to try something new we supported her," said her dad Dan.

The proud poppa remembers going to the first day of school every year.
"We'd stand in front of her class and explain about her leg. Then we'd answer all the kids' questions," Dan explained.
Soon, his little girl was just one of the kids playing at recess, though there were small mishaps along the way.

"Cady wanted to play soccer, so we let her join a local team," Dan recalled. "But I forgot to tell the coach about her leg, which flew off when she went to kick the ball at practice."

Cady still remembers the soccer incident with a wry grin.

"One of the boys ran up to me and said `Is it just my imagination or did your leg just fly off?"' she remembers.

The Glendora girl finished the season, but later decided soccer wasn't for her.

Which certainly didn't prevent her from pursuing other athletic interests. In fact, Cady became a cheerleader at Glendora High School. She was in the Pep Club for four years, becoming its commissioner.

Cady also became a student leader at the local high school. She served as the executive vice president of the Associated Student Body.

"I was also active in the Make a Difference Club because I wanted to give back to my community," she said.

The club collected clothes for the homeless along with other community projects. Cady also participated in many walks for the American Cancer Society.

The Glendora amputee appreciates all the help everyone has given her along the way. Especially the Shriners Hospital for Children.

"The doctors were awesome! They were very caring, and they gave me new legs for free," Cady said.

As the Glendora girl grew, she got "new" legs to match. Cady pointed out that the custom limbs cost $10,000.

She's even kept a sense of humor about her amputation.

"Last Halloween, I took my foot off and dressed as a pirate," Cady said with a laugh.

Next month, she'll begin her studies at Azusa Pacific University. Cady wants to become an elementary teacher in the first or second grades.

"I want to help all children, not just those with disabilities, achieve what they might think is impossible," she explained.

But first, this fine role model will undergo more surgery at Shriners Hospital.

"They said the operation will only take an hour, but it'll take six weeks to heal. Then they'll fit me for another new leg," the teen said.

So Cady will have to use a wheelchair when she accepts her award at the coalition's gala dinner in Irvine on Aug. 28.

But whether she is rolling or walking, Cady has inspired many others to overcome their own limitations.