That’s exactly what the Shiners Hospital for Children is, and the monument is growing with an $80 million, 40-bed addition. Among the more than 23,000 kids who have been served by Shriners

By Susan Sunderland (for the complete story and Pictures go to http://www.midweek.com/content/story/midweek_coverstory/Shriners_Hospital_for_Children/P1/

For 80 years on Punahou Street, Shriners Hospital has been healing ill and injured children, and changing their lives for the better

If buildings could talk, what fascinating stories they would tell. Buildings house people as they play out their daily lives. They shelter great minds at work developing solutions that change lives. And they are the foundations from which great traditions emanate.

This is the story of a building with great stories to tell. 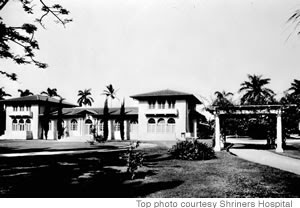 It is located at 1310 Punahou St., just off the H-1 Lunalilo Freeway There’s something poetic about that because the building we refer to - Shriners Hospital - is a monument to compassionate and responsive health care, something our nation is grappling with right now.

We often take for granted what’s in our own backyards. How many of us drive or walk past Shriners Hospital without knowing what goes on inside? Unless you have business there, you never give it a thought.

After reading its story, hopefully you’ll have new insight and regard for what this building encompasses, the people who bring it to life every day and the humanity it represents.

The original Shriners Hospital on Punahou Street was deeded to the Shriners by the Dowsett family.

Shriners Hospital is supported by the Shriners fraternity, a charitable organization first established in 1827. Early members of the Shriners brotherhood included Hawaii’s King Kalakaua. In 1919, the Shriners began focusing on the needs and treatment of children with orthopedic conditions. That is, disorders or deformities of the spine and joints.

In 1923, a Honolulu hospital was established in the Liliha area. In October 1930, the present Punahou site was deeded to Shriners Hospital by the Dowsett family.

The Dowsett mansion, an impressive three-wing structure with trellis driveway, was converted to a 30-bed hospital. An expanded structure was built in 1967.

The 86,000-square-foot hospital met the needs in 1967, but now it doesn’t. With advancing medical technology and the need for modern infrastructure, plans were made five years ago for a new $80 million, 40-bed hospital complex.
Dr. Carl Scheer, patient Kiaka Malagaomo-Pio and Wesley T. Park, a former patient, celebrate the hospital’s expansion

The 138,000-square-foot state-of-theart facility allows Shriners to continue its mission of providing specialized medical care to thousands of children from Hawaii and the Pacific at no charge.

That’s right, at no charge. 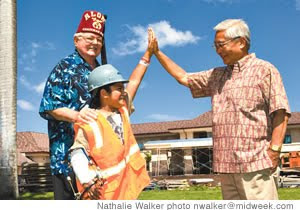 Shriners have helped more than 23,000 kids in Hawaii who suffer severe orthopedic problems. While there are fully equipped radiological, surgical and therapy facilities, there is no billing department. That’s because the hospital does not bill patient families.
Care, research and education are possible because of the generosity of donors. The Shriners Hospital endowment is the major donor, and Hawaii’s hospital is one of 22 such benefactors in North America.

Yes, those guys in the red fez hats who march in parades and bring joy to public events as Shriner clowns have a serious philanthropic purpose. It is neither a religious organization nor a secret society, according to members. The 950 or so members in Hawaii, like other fraternal clubs, hold monthly meetings at the Scottish Rite Cathedral in Makiki, enjoy social get-togethers and support the organization’s main cause: helping impaired children.


This is no small victory.
After two years of construction, the new Shriners Hospital on Punahou Street is ready to celebrate a grand opening. Dedication ceremonies, victory dinner, screening clinic and other fanfare are planned this month.

For the first time in its history, the Shriners turned to the public for donations. The lion’s share comes from the Shriners endowment. But a compassionate community is contributing about 20 percent of the needed funds.

Despite tough times, the monumental project came through fortified for the
future. It’s like the children who are healed there. They dodge adversity and thrive.

Someone who knows about that is U.S. Sen. Daniel Inouye, who says it’s personal. “I owe a lot to this hospital because 71 years ago they fixed my fractured elbow,” he says. “It was a compound fracture and, as a result, I got in the service.”

There are many heart-warming stories that are part of this landmark structure. Not only is it a functional building, but it is architecturally aesthetic as well. SRG Partnership, with assistance from several local firms, has addressed the hospital’s space and modernization needs with an eye to reflecting Hawaii’s historic territorial architecture.

But a building is bricks and mortar without the people who bring it to life.

We asked three spokesmen - a present leader, a former patient and the face of the future - to tell us about their relationship with Shriners Hospital.

Dr. Carl Scheer is a retired radiologist who was in private practice in Connecticut for 25 years before moving to the Islands. Life here has been gratifying, he says, thanks in part to an active involvement in Shriners.
He says: “I became a Shriner in 1995 and served for many years on the board.

“I have been involved in the implementation of the new hospital building project over the last six years. A testament to the value of this project is that the hospital is busier than ever. This is a good thing because it means more people are being helped. We are proud to help patients change their lives and become productive citizens when physical impairments or disabilities no longer interfere with their growth.

“We are proud that no bill is ever sent to a patient or family. That will not change. Anyone who falls within the guidelines of our program is accepted for treatment.

“We invite the public to bring problem cases to our attention so we can screen them for consideration. We have outreach clinics throughout Hawaii and the Pacific. And thanks to this modern, fully equipped facility, now we can continue with what is regarded as the world’s greatest philanthropy.”

Wesley Park, author of Lessons Learned on the Corner in Kalihi and Lessons Learned on Bishop Street, claims his greatest life lessons happened on Punahou Street while being treated at Shriners Hospital. The successful businessman-educator says:
When I was 5, my parents took me to Children’s Hospital to have my tonsils out and the next thing I knew, I was in an iron lung.

“I had polio that affected my upper body. I couldn’t lift my right arm above the shoulder and when I raised my left arm it would fall. My head was tilted on a weak neck. I went to Shriners twice a week until I was in high school.

“I didn’t want anyone to know I had polio. Growing up in Kakaako and Kalihi meant a lot of fistfights. Somehow I survived that, but I had a lot of lumps on my head. Shriners Hospital strengthened me physically and emotionally.

“The way I see it, the main thing you can do as a person is to do your best - your personal best. Turnarounds are possible with a positive attitude. “

Face of the Future

Kiaka Malagaomo-Pio of Wahiawa was 5 years old when he stepped on a skateboard and tried to take a ride. He took a serious spill and suffered traumatic injuries to his arm and leg. As a result, he has a radial clubhand deformity that requires an external fixator splint to facilitate healing. His parents, Afatia and Moana Malagaomo-Pio, have seen their young son through a lengthy process of hospitalization, surgery and rehabilitative therapies that would have been cost-prohibitive had it not been for Shriners Hospital. 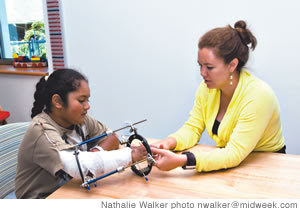