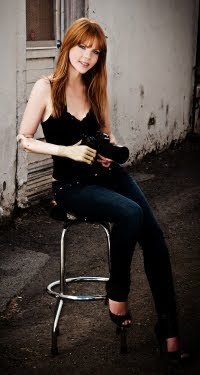 THOUSAND OAKS, Calif. – Carly Davis is articulate, intelligent, motivated, and energetic. Like most college seniors, she has big challenges ahead of her. Davis, 22, has faced challenges before – since her birth, actually. She was born a congenital amputee, though she is quick to tell you she isn´t missing anything.

Davis has entered the Miss Lake County 2010 Pageant, an official Miss California and Miss America Preliminary Pageant. The competition will take place Friday, Sept. 3, 2010, during the Lake County Fair, held at the fairgrounds in Lakeport.

Alley, both a licensed and board certified prosthetist, has specialized in upper limb prosthetic care for nearly 20 years and knew the i-LIMB Hand and his revolutionary interface system would give Davis more confidence and enable her to accomplish her personal and career goals.

"The i-LIMB gives Carly the ability to better grip objects and offers additional motor control, something that´s especially important for Carly who works as a professional photographer to earn money to pay for her education," Alley said. "Because it captures a much greater amount of skeletal motion than traditional sockets, the High-Fidelity Interface is also ideal for Carly, who has a very short congenital amelia."

A senior at Sacramento State University, Davis is studying kinesiology with the ultimate career goal of working in the medical field with children in rural and third world countries. Her current educational plans include a detour through a prosthetics program. With both a medical degree and prosthetic training, she feels she would be better prepared to work with the underserved population of people with limb differences, especially in other countries. Entering the Miss Lake County pageant seemed to be the perfect opportunity to publicly share her passion to redefine beauty and ability as well as to win scholarships for her prosthetics and medical school education.

Davis decided to enter the pageant for several reasons. "I didn´t know many people like me when I was growing up," she said. "The only really successful person I knew was Jim Abbott, the baseball player. I hope that by being visible, I can help other children the way Jim Abbott helped me.


"I am active on a forum called Sammy´s Friends for families of children with limb differences and by putting myself out there, I show the world that I can do anything I want to do," she said. "And by doing the pageant, I hope it will help the kids when they see me because they will know they can do anything they want to do."

The pageant requires contestants to have a platform or issue to advocate. Davis´ choice was easy: Shriners Hospitals for Children. Shriners Hospital is a pediatric specialty care hospital with a big mission, "Help Kids Defy the Odds." Davis was a Shriners baby, treated by its physicians, therapists and prosthetists from shortly after her birth until she was 21 years old at Shriners Hospitals in Salt Lake City and Sacramento.

Davis is grateful for the services she received from the Shriners organization. She recalls the visits to the hospital throughout her life as highlights. Being with the other children who were "like her" meant that she wasn´t alone. Davis recalls one visit when she wanted to play pool on the pool table. She was intimidated by the pool cue, however, one of the therapists saw her trying to figure out how to play the game and quickly came over and together they figured out a solution. "At Shriners, anything is possible," Davis said. "They don´t know the word ´can´t,´ they only know how to make it happen" Davis is grateful to be working with Alley since she aged out of Shriners because he, too, supports her in reaching for her dreams.

For more information on Carly Davis or ways you can sponsor her participation in the Miss Lake County 2010 pageant, contact her at carlyjeene@gmail.com or on her Face book page (Carly for Miss Lake County).

Southern California-based biodesigns inc. is a technology-driven prosthetics company specializing in the most advanced upper and lower limb prosthetic solutions and product development. For more information, visit www.biodesigns.com.
Posted by Unknown at 9:51 AM