In a tradition reaching back 35 years, the Alki Masonic Lodge held their Annual School Awards on May 20 to honor the hard work, both in the classroom and the community, of eight juniors each from Chief Sealth and West Seattle High School.
In the words of the Mason’s, “The purpose of this School Awards Program is to recognize, and thus stimulate, participation in Public School Education. The Masonic Fraternity has long supported the public school system as one of the basic necessities in maintaining the American Ideal of Democracy.”
Mason Martin Monk, who ran the show, said the 35th anniversary was a special one for him since he had received the award 35 years ago as a student at West Seattle High School.
In addition to a plaque honoring their achievements, the juniors also received $200. After the first 16 recipients were announced (and who in turn announced the support of their family and friends in attendance), the Mason’s unveiled their four winners out of that group (a boy and girl from each school) who receive additional scholarship funds and are entered into the Mason’s statewide scholarship competition. 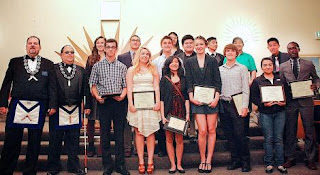