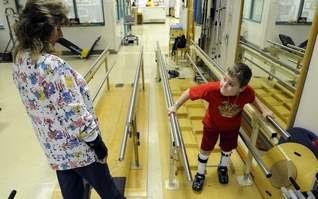 The children's hospital is among six national officials may close as a cost-cutting measure. However, Ralph Semb, chairman of the national hospital board of trustees, confirmed Sunday that LSUHSC-Shreveport officials have been in talks with members of the local hospital board.

LSUHSC-S officials haven't commented on whether there are negotiations to keep Shriners Hospital open.

Some 1,200 Shriners will vote on proposals related to the hospitals during the organization's annual meeting July 6-8 in San Antonio. The national trustees in March agreed to put closing hospitals to a vote because of a mounting budget shortfall.

"I think what's going to happen at this point in time is there will be a presentation or resolution to allow us to continue talks between all of those hospitals on the closure list with the hospitals near them," Semb said.

The Shreveport Shriners Hospital, the first in the organization's 22-campus system, opened in 1922. It provides specialized orthopedic care for conditions ranging from scoliosis to cerebral palsy.

Troy Bramlitt, whose grandson recently underwent surgery at Shriners in Shreveport, wonders where families will turn if the hospital closes its doors.

Bramlitt, of Ecru, Miss., spent nearly a month at the hospital while his grandson, Gage, underwent physical therapy after surgery to straighten his feet and legs. Gage was diagnosed with cerebral palsy as a baby.

Doctors used bone from Gage's hips to straighten his feet. They realigned his thigh and leg muscles so he stand tall and walk without the help of a walker someday.

"It's been a blessing to come here," Bramlitt said as Gage worked to strengthen his legs. "I've learned a lot. It's been good for me, too."

Doctors used bone from Gage's hips to straighten his feet. They realigned his thigh and leg muscles so he stand tall and walk without the help of a walker someday.

Care for Gage and others is free. The Shriners organization depends on an endowment to generate money for the hospital system's $850 million-a-year budget. However, the endowment plummeted as the stock market fell, meaning it generated less income.

Local Shriner John Knox hopes a rebound in the stock market will improve the endowment's bottom line and help convince the national trustees to keep the Shreveport hospital open.

"There's been a lot of talk about doing things to keep it from being shut," Knox said. "I think they're even going to try to get Gov. (Bobby) Jindal to go to the meeting in July."
Posted by Unknown at 9:44 AM