One circus, one good time, Hermiston, Or. 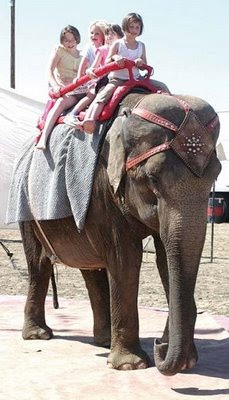 By ROBERT DEANE The Hermiston Herald

Children and adults enjoyed beautiful weather and a fun show during Circus Gatti's visit Saturday to the Umatilla County Fairgrounds in Hermiston.

While numbers in total were down, 500 total for both shows (150 afternoon, 350, in the evening), it didn't stop parents and their children from enjoying the theatrics of the circus' arial acrobats, metal motorcycle riders, clowns, elephants and other activities for the annual Shriners presented event.

Adults even got in on the fun personally with Circus Gatti's Alejo the clown picking out volunteers like Hermiston resident Jose Garcia to both act like he was riding a motorcycle and jump rope while blind-folded.

"It was the best workout of my life," said Garcia.

Garcia said he brought his three-year-old daughter to the circus so she could ride the elephant.

For some families coming to the circus has become a family tradition.

"It's our third year in a row," said Bobbi Hughes whose two daughters Mystery, Lexus and their friends Jazzy Billman and Tierra Appling rode one of the circus elephants during intermission.

For Appling, it was the first time she'd been to a circus.

For the Shriners, particularly the Desert Shrine Club of Hermiston who has sponsored the circus for 45 years, the fun children have is what the event is about.

"I think it's the world's greatest philanthropy and serves a good cause," said Dick Crist, Desert Shrine club member.

The money, he added, goes to the Shriners' Children's Hospital in Portland where children are admitted and treated without charge.

Desert Shrine Club president Reese Burkenbine was happy to see the turnout the circus received Saturday that raised $2,000 for the Shriners.

"Considering the economy we did pretty good and we'll bring them back next year," he said.
Posted by Unknown at 9:27 AM