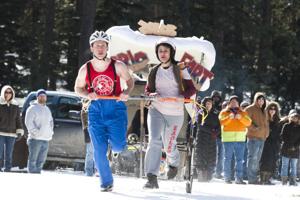 Outhouse races in Nemo
Five years ago Pete Adkins never would have thought he would be wearing a Shriners’ Fez and preparing for his first outhouse race in Nemo.
Adkins of Rapid City joined the philanthropic organization four years ago after his son Marshall, then just a year old, needed an amputation for a birth defect that caused his foot to grow toward his knee. With the help of the Shriners, his son learned to walk wearing a prosthetic leg.
“When you see a child with a smile on their face and walking, it is amazing,” Adkins said. "It's pretty special."
Wild costumes and middle school toilet humor swarmed over the small mountain town of Nemo at the ninth annual “Nemo 500” Outhouse Races on Saturday, where the “Super Mario Farts” team comprised of teachers won their sixth title in seven years.
The team’s outhouse broke during last year’s race, ending their streak of five straight titles. First-year organizer Andrea Balzano, a teacher with the Todd County School District, said the team had been putting in a lot of work to fix the cart and that she has been looking forward to the Nemo race since November.
The race had a total of 12 teams entered, and a very large crowd filled the Nemo Guest Ranch. Race organizer Troy Saye said the biggest objective for the day was to raise money for kids and have a great community event.
All proceeds from the race and raffle-ticket sales this year go toward the Shriners transportation fund for kids. The compettion was split into three different groups based on the median age of the participants; Division 1 is ages 12–25, Division 2 is ages 26-45 and Division 3 ages 46 and over.
Winners of Division 3 were the “Village Poopers” from the Ellsworth Air Force Base HVAC shop; Division 2 was “Dukies of Hazard” from Black Hills Auto Care; and Division 1 was the “Super Mario Farts” from teachers of South Dakota.
Posted by Unknown at 11:48 AM