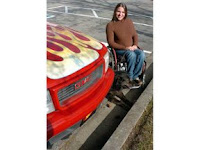 Can't slow her down: Paralyzed from an injury, student wants to change minds

Kristina Shepard poses for a portrait on Wednesday with her companion dog, Chevy, and her truck, which sports her nickname — Hot Wheels.

It’s safe to assume that anyone with the nickname "Hot Wheels" isn’t afraid of attracting attention.

Kristina Shepard figured out a long time ago that she can’t avoid drawing curious stares everywhere she goes, so she uses it as an opportunity to educate people.

Shepard, 24, is a senior at Brenau University, majoring in mass communications. By any measure, she would be an exceptional student. But around the Gainesville campus, she’s known as the woman who has a wheelchair. And a big dog. And a crazy truck.

Shepard has been paralyzed from the waist down since she was 10 months old, when she was injured in a car accident. Yet she considers herself lucky.

"I was a patient at a Shriners Hospital for Children in Northern California, and I saw a lot of older kids come in who’d just been injured and had to learn how to live again," she said. "It’s easier for me because I’ve always been this way. This is how I’m supposed to be."

Shepard credits her mom, who at the time was a single parent, for refusing to treat her differently from other children.

Shepard also could always count on support from Jacob Rhoades, her best friend since middle school. And in 2002, she got another "best friend," of the canine variety.

"Chevy," whose name reflects Shepard’s love of cars, came to her as a 7-week-old Dutch shepherd puppy. He now weighs 97 pounds.

"I sometimes get shoulder pain from pushing the wheelchair," she said. "My doctor suggested that I get a power chair, but I didn’t want to do that. So Chevy pulls the chair when I get tired. I take him everywhere with me, including on airplanes."

Shepard drives a big, red GMC Sonoma with flames and a "Hot Wheels" logo painted on it. Most wheelchair-dependent drivers use minivans, but Shepard refused to drive such a stodgy vehicle. Instead, she found a unique type of hydraulic lift that can be installed on pickup trucks.

When she was 21, Shepard’s life took another unusual turn. She was working in a medical supply store in Sacramento when her boss mentioned something called the Miss Wheelchair contest and urged her to sign up.

"It’s not a beauty pageant," she said. "Not that there would be anything wrong with a pageant, because there are a lot of beautiful women who are in wheelchairs. But I had to go before a panel of judges and talk about how I could represent women with disabilities in California."

The judges apparently found her convincing. Shepard was crowned Miss Wheelchair California for 2005.

"It was so rewarding to me, because I was able to visit kids at the Shriners hospitals and serve as an inspiration to them," she said.

Shepard competed in the Miss Wheelchair America contest in New York, but wasn’t discouraged when she didn’t win. She spent the year attending conferences, rallies and other California events related to people with disabilities, and met with politicians about proposed legislation.

Every now and then, Shepard found time to visit an uncle in Oakwood, who had a house on Lake Lanier. Then her mom and stepfather retired and also bought a house on the lake.

In the summer of 2006, Shepard and Rhoades, who was by then her boyfriend, decided that they, too, would move to Georgia. They bought a house in Dawsonville, and Shepard, who had attended the two-year Shasta College in Redding, Calif., enrolled at Brenau University.

She quickly immersed herself in school life, becoming managing editor of Brenau’s online newspaper The Alchemist. She also hosts a live radio show from 3 to 5 p.m. Saturdays on WBCX-FM 89.1, the college’s radio station.

"I do the ‘Soul Track,’ which is kind of Motown stuff. But I love all kinds of music," she said. "I also do ‘Voices of Brenau,’ which is short interview segments with faculty and staff. It airs at 9 a.m. weekdays."

Apparently all these endeavors weren’t quite enough to keep her busy. This semester, Shepard was hired as an intern in the public relations department at Northeast Georgia Medical Center.

"We were very impressed with her resume on paper, and when you meet her in person, she just blows you away," said Katie Dubnik, a member of the hospital’s public relations staff.

"Her enthusiasm and her maturity are just amazing. And she never lets herself be limited by her disability. It opens your eyes to the things you take for granted every day."

Shepard said regulations mandated by the Americans with Disabilities Act have made it easier for handicapped people to get around.

"But access is still difficult in some places," she said. "In California, most buildings are new. At Brenau, a lot of the buildings are old, and it would be hard to retrofit them (with elevators, for example)."

She said there’s also a long way to go on changing people’s attitudes, and she considers that part of her mission in life.

"I hope I can make a difference in how people perceive those with disabilities," she said. "Everywhere I go, I get questions: How do you drive? How do you go to the bathroom? How did you get injured?"

Shepard doesn’t mind answering such questions, because information leads to better understanding. But she does observe some inexplicable behavior.

"I’ve had people say the strangest things," she said. "Some think I’m faking, because they say I’m ‘too young and pretty’ to be in a wheelchair. I’ve had people pray over me in the supermarket, asking God to heal me. A homeless guy in New York told me I was in a wheelchair because I don’t believe in God, which was weird because I’m a Christian."

She hopes people, even those who mean well, will stop trying to "fix" her and instead accept her as she is. She knows that other disabled people feel the same way. And she plans to use her communications skills to get that message out.

She’s already doing volunteer work for Endeavor Freedom, a Winder-based nonprofit that advocates for the disabled.

"I want to pursue a masters in organizational leadership at Brenau (after graduating next spring)," she said.

Meanwhile, Shepard is preparing for other big changes in her life. On Christmas morning 2006, Rhoades proposed to her by hiding an engagement ring in her holiday stocking. They plan to marry at Lake Lanier Islands in June 2008.

"The doctors say I will be able to have children, and we’re really excited about that," Shepard said. "We’ve known each other for so long that it’s like Jacob is already part of the family, so we can’t wait to start a family of our own."

Raising a child from a wheelchair will be a challenge, but there’s never been an obstacle Shepard hasn’t been able to overcome. She sees life as a series of adventures.

"This summer we got a wakeboard with a seat on it, and I water-skied for the first time," she said. "It’s awesome. It’s a sense of total freedom. And I wondered why, having grown up in California, I never tried it until now."
Posted by Unknown at 4:36 PM

I found this site using [url=http://google.com]google.com[/url] And i want to thank you for your work. You have done really very good site. Great work, great site! Thank you!

Who knows where to download XRumer 5.0 Palladium?
Help, please. All recommend this program to effectively advertise on the Internet, this is the best program!