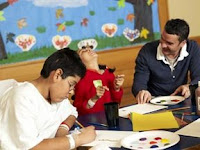 Photo by: Meredith Jenks Revealed!
Celebs Fingerpainting for a Good Cause Actor Balthazar Getty may have a growing brood at home (he and wife Rosetta welcomed their fourth child, June Catherine, on Oct. 2), but the star of ABC's Brothers & Sisters still made time for sick children recently through his work with The Art of Elysium, a nonprofit that pairs up hospitalized kids with artists, actors and musicians for creative escape. Getty, 32 (shown painting with children at Shriners Hospital Los Angeles) is taking part with celebs like Eva Mendes, Patricia Arquette and Joaquin Phoenix, and he and his wife are co-chairing the organization's 10th anniversary fund-raising gala in January. To read more about The Art of Elysium and its founder, Jennifer Howell, check out this week's issue of PEOPLE, on newsstands now.
– Alexis Chiu
Posted by Unknown at 1:52 PM