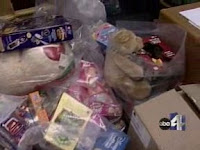 
A smash and grab thief has taken Christmas away from some sick children. Bags of toys on their way to Shriners Hospital were stolen. It happened early Wednesday morning in a Holladay neighborhood, the result of weeks of collecting donated toys from generous people—Gone!

“The first thing I thought of were the kids,” said Jeff Crockett. Crockett’s office at Henderson Wheel & Warehouse is packed with bags of toys, they represent weeks of hard work from the company’s 18 independent auto repair shops, from Springville to Logan, and their generous customers who gave. “They can barely afford to fix cars yet they are bringing in toys for these kids,” said Pyle Wheel & Brake owner, Brett Finklea. Now a good portion of those toys are in the hands of a thief. “Some were in bags that said they were going to Shriners Childrens Hospital so as they were taking these toys and seeing… they knew they were going there.”

“These children are in the hospital for Christmas, worst time of the year to be in the hospital, we were excited to give them a toy and they were stolen,” Jeff Crockett said. Five to six bags of toys were taken from Crockett's car after he made a collection run last night. He says normally the toys are brought inside but it was raining. “I got lazy so I just pushed them all down made sure you couldn't see any toys,” he said.
Crockett’s car was part of a rash of smash-n-grabs in his neighborhood. “I woke up and they were all gone,” he said. All that was left were shards of glass from Crockett’s rear window. “I just feel bad. It would be like going to the hospital and stealing something from a little boy in the hospital.” The theft has left Henderson Wheel and Warehouse short of its goal. “We're hoping we can find a way to replace them so we can give some kids a merry Christmas,” he said. Toys, clothes and games are needed, anything for a child one to 18 years old.

For drop-off locations to one of Henderson’s 18 independent auto repair shops go to: http://www.800autotalk.com/ or call Jeff Crockett at: 486-4916. They will be accepting toys until the end of December.
Posted by Unknown at 3:25 PM