Heather gets Her Bike Back 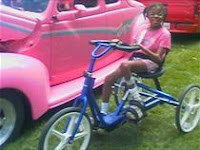 Girl with cerebral palsy gets stolen bike back
Reported by: Megan Herrick
12/10 10:48 pm

“At one point they told us she may not even walk,” say Heather’s mom, Andrea Landeen.

But Heather has come a long way, beating the odds, and while there is no cure for the cerebral palsy, supportive therapy, like riding a bike, can help improve a child's motor skills. Besides, Heather loves it.

“She will go out in the rain and sit on it and say can I ride my bike,” says Heather’s mom.

“Mommy the bike is a privilege,” Heather exclaims in joy.

A privilege that went missing Sunday night; and a privilege her family desperately wanted back.

“It was right up on the porch and someone came and took it,” says Andrea. “We are just hoping someone has seen it and recognize it because it's not a normal bike...it's definitely adapted for a special needs child.”

The bike is pictured to the upper right of this story and looks like a gigantic blue tricycle with a loop for handlebars, making it easier for Heather to turn.

It was a gift donated by Shriners Hospital's Bike Fund. A replacement would have cost nearly fifteen hundred dollars, money that Heather's family say they just don’t have.

“There is now way we can replace it...we really hope...they bring it back,” says Andrea.

As she continues speaking, Heather grabs her mom's shoulder and says, “Mommy?”

Monday evening, the bike was located by a David Bate, who saw ABC 4's report on television. He called ABC 4 and Sandy Police, who located the bike and let the Landeen family know where it was.

The family picked up the bike and an ecstatic Heather was riding it within minutes.

Heather's mom Andrea told ABC 4 she wanted to bake some cookies for Bate, who said he could not stand the thought of a child losing her bike so close to Christmas.

Bate said, "Me and my wife are foster parents, and so kids mean a lot to us, especially since we weren't able to have any of our own, so we want to help any kids, especially this time of year."
Posted by Unknown at 10:12 AM