On her Own 2 feet 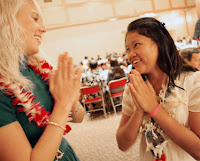 Sithan Leam, right, thanked Shriners Hospital Nurse Care Coordinator Bonnie Paulsen yesterday for taking care of her during her recuperation from surgery at Shriners in the past year. The Cambodian girl bade farewell to her supporters at a party at Central Union Church in Makiki.(Photo By Jamm Aquino)

Dressed in blue jeans and standing on her own two feet, a Cambodian girl who came to Hawaii for surgery to allow her to walk said goodbye last night to supporters in the local Cambodian community.

In the benediction before the farewell dinner for 15-year-old Sithan Leam, the Rev. Larry Corbett, Central Union Church senior minister, noted, "Sometimes it takes a whole village of people to heal a child."

Star-Bulletin readers and Cambodian community members contributed thousands of dollars to pay for Sithan's travel to Hawaii for treatment and a fund that will help pay for her continued schooling in Cambodia.

Sithan suffered severe burns on her left leg as an infant, and her foot was fused to her thigh by scar tissue.

She hopped on her right leg, instead of walking, until doctors, nurses and therapists at Shriners Hospital for Children in Honolulu were able to separate the scar tissue and outfit her with a prosthetic leg.

She was able to walk for the first time a couple of months ago after undergoing several surgeries, skin grafts and physical therapy.

"It's kind of amazing to see her now as when I first met her at the airport in February," said Anthony Deth, who, along with the charity Medicorps, helped coordinate Sithan's stay in Hawaii.

At that time, Deth said Sithan weighed only about 80 pounds and appeared scared after her first plane trip. She ate only rice on the flight because everything else was too strange.

Sithan's treatment at Shriners is nearly complete. She will likely return to Cambodia next month.

"She's going to be missed very much, especially at Shriners," said nurse Bonnie Paulsen. "When I first met Sithan, she was absolutely frightened. Now she's totally come out of her shell. She's been an absolute inspiration."

Cambodian community member Patrick Keo said Sithan's story reminds him of his own struggles when he first immigrated to the United States.

"We connect with her. We identify with what she's gone through -- coming to a new country without knowing anybody or knowing the language, and how she misses her family," he said.

Sithan said she will miss Rinou Kong and Sary Phean, the couple that has taken care of her in Honolulu, but is looking forward to seeing her own family again in Cambodia.

She also thanked the doctors and nurses at Shriners for helping her.

Sithan's story is especially appropriate at this time of year, Corbett said. "To see a child's life change is always inspiring."