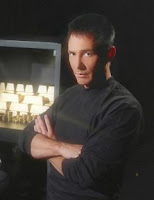 Over 300 children turned up to watch Monte Carlo headliner Lance Burton and his showbiz friends entertain at his annual Las Vegas Shriners Temple holiday season show—a tradition that began here in the early 50’s with Bing Crosby and Bob Hope.

Comedy juggler Michael Goudeau, who has performed with Lance since premiering at the Monte Carlo in 1996, opened the show, followed by Lance’s girlfriend, showgirl singer Gabriella Versace who starred at the Rio. Fellow magician Fielding West also performed his comedy conjuring routine. The Shriners here use funds raised to transport seriously ill children to their Shriners Hospital for Children in Los Angeles for free treatment.
Posted by Unknown at 10:39 AM