Display of a variety of classic kings of the road supports Shriners Hospitals for Children. 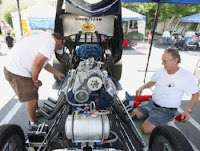 Display of a variety of classic kings of the road supports Shriners Hospitals for Children.

In a city where classic cars and hot rods reign supreme, it’s not uncommon to see a car show sprout up nearly every weekend during the summer in Burbank.

For car enthusiast Jeff Lindstrom, harnessing Burbank’s love of cars for a charitable cause was a no-brainer.

On Saturday, he and his colleagues at the Masonic Lodge on Irving Street held their slightly larger second annual car show to support Shriners Hospitals for Children, an international network of Free Mason-supported medical facilities that offer free specialty care for children.

Between 75 and 100 classic cars and hot rods were expected to fill the lodge’s parking lot as onlookers strolled to live music and admired the shiny hobbies of local enthusiasts.

Lindstrom said he expected to raise a little more than the $1,500 that the event made last year through car registrations. He and other Free Mason volunteers plan to grow the annual event in coming years as word of the show spreads through the motoring community.

Until then, the car show remains a small, community-oriented event, with a single overall competition category.

“As we get bigger, we’ll expand the awards,” Lindstrom said.

Organizers have also deployed enticements to draw more entrants, like free lunch and a goodie bag for registrants.

“We try to give back to them and thank them for their support,” Lindstrom said.

He may also change the date to escape the shadow of the bigger, more competitive car shows. The world-renowned Pebble Beach Concours D’Elegance classic car show was on Sunday, which preempted famed car enthusiast Jay Leno’s attendance at the Masonic Lodge, organizers said.

And hundreds of car collectors are preparing for Burbank’s Be Boppin’ in the Park vintage car show and festival Saturday on Magnolia Avenue. Last year, the event attracted thousands of people from throughout the Southland and more than 200 exhibitors.

Those shows are all well and good, but for those car enthusiasts who just want to meet up and share their hobby, community shows like the one on Saturday is the perfect pitch, participant Steve Gallegos said as he stood by his 1965 Shelby Cobra replica.

“It’s a lot of fun to get out there and talk engines,” he said.

From a polished, vintage Jaguar to a 1953 Chevrolet pickup, the rows of cars parked behind the Masonic Lodge offered people a varied sampling of the local classic car stock.

“I think it’s great that they do this,” said Marsha Nolan, who lives near the lodge.

“I think it’s a great cause, and I love dreaming about my hair blowing in the wind in some of these cars.”
Posted by Unknown at 11:32 AM