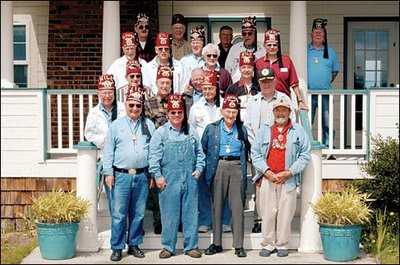 It’s been said that Shriners of North America is one of the best-kept secrets in health care.

Bob Clark, a longtime Sequim resident and president of the Olympic Peninsula Shrine Club, is stepping forward to spill the beans.

Shriners is an international fraternity based on the Masonic principles of brotherly love, relief and truth with about 375,000 members in 191 chapters in the U.S., Mexico and the Republic of Panama, Clark explained. Members pay a $5 hospital assessment fee per year and host a variety of community fundraisers and private money raising get-togethers.

Money raised benefits Shriners Hospitals for Children, a one-of-a-kind health care system of 22 hospitals dedicated to improving the lives of children by providing specialty pediatric care, innovative research and training programs. Children with orthopedic problems, burns or spinal cord injuries are eligible to receive free medical care up to the age of 18, or 21 in some cases.

Absolutely no money or insurance information is exchanged. In fact, Shriners hospitals don’t even have cash registers, Clark emphasized.

If needed, transportation costs to and from Shriners hospitals and lodging is paid for, too. Medical, travel and lodging expenses are paid by Shriners chapters much like the Olympic Peninsula Shrine Club.

It costs $2.5 million per day to operate all 22 Shriners Hospitals for Children.

Exactly who are the ‘Shriners?’
Shriners come in all shapes, sizes and backgrounds. They are doctors, lawyers, teachers, servicemen, plumbers, stay-at-home fathers, sons and businessmen.

The fraternity of Freemasonry is the oldest, largest and most widely known fraternity in the world. The basic unit of Masonry is the Blue Lodge, where members earn the first three Masonic degrees known as the Entered Apprentice, Fellow Craft and Master Mason.

Once a Master Mason, a man can belong to multiple organizations with Masonic roots, including the Shriners of North America.

Women are eligible to join and participate through the ladies auxiliary.

Clark, a father of three and Sequim pioneer, comes from a long line of Shriners. Following in his father’s and grandfather’s footsteps, Clark takes pride in wearing the “fez,” given to him by his grandfather on the day he joined the lodge.

The fez, traditionally red with a black tassel, is the official Shrine headgear. The stylish hat gets its name from Fez, Morocco, the place where it first was manufactured.

Clark has been on both sides of the Shriners club. He’s helped raise money for Shriners Hospitals for years and one of his cousins was a recipient.

At the age of 2, his cousin was standing on a chair and had a washing machine accident that injured the young child’s arm and resulted in at least a dozen surgeries, Clark said. Though his cousin’s arm never fully matured, Shriners Hospital made it possible for the child to play sports.

Benefiting from Shriners Hospitals for Children
The first patient treated at a Shriners Hospital free of charge was a young girl with a clubfoot who learned how to walk improperly on the top of her foot rather than the sole. Since then, more than 865,000 children have been served.

Shriners Hospitals for Children get support in more ways than one. It’s not uncommon for celebrities to endorse the cause.

The nearest Shriners hospital is in Spokane.

Attend a screening clinic and change a child’s life
The Olympic Peninsula Shrine Club participates in the Sequim Irrigation Festival each year, as well as hosting four screening clinics for children. Parents, guardians, grandparents and other family members are invited to bring children with orthopedic, burn or spinal injuries or illnesses to a clinic to be examined by a medical professional and considered for Shriners assistance.

During a routine screening clinic last year in Sequim, a 5-year-old boy from Joyce who lost a leg from the knee down in a riding lawnmower accident was brought in by his mother. The boy was accepted into the Shriners Hospital program and will receive free medical care and prosthesis fittings until he is 21 years old, Clark said.

The next screening clinic is Oct. 4 in Forks, followed by an Oct. 11 clinic in Port Townsend.

“The hardest part is getting parents to bring the children in,” Clark said.

Lance Otis, Olympic Peninsula Shrine Club director, agreed with his friend and fellow Shriner Clark, that it’s critical for parents, guardians and caretakers to bring children to screening clinics and encourages eligible families to take advantage of the services offered by Shriners Hospitals for Children. “These are men from all over the world wanting to help provide care for children,” Otis said. “We are looking for more children to help.”

“There is not a charity on earth that spends more per day than the Shriners,” Otis continued boldly. “You can be rich or you can be poor, it doesn’t matter. We still want to help you.”