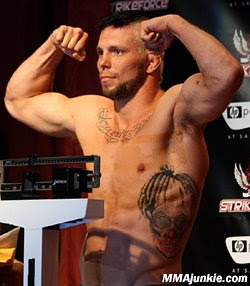 Ruediger, Kyle, Metcalf and Galvao booked for Saturday's Shriners event
by John Morgan on Aug 29, 2008 at 1:30 pm ET
By pairing with one of the nation's largest charitable organization, MMA's struggle for mainstream acceptance takes another step forward tomorrow night in Santa Monica, Calif.

The Shriners of North America is hosting the first-ever "Fighting 4 Kidz" charity MMA event at Civic Auditorium. The event, featuring notables Gabe Ruediger, Mike Kyle, Jeremiah Metcalf, Andre Galvao and others, will raise money for the Shriners Hospitals for Children -- a network of 22 privately funded orthopedic hospitals throughout North America.

"I'm actually a Shriner," Weiner said. "And I'm also a huge MMA fan. I've been around the sport for years.

"I thought about this idea to put on an event (and) raise the awareness of Shriners Hospitals and what they do. And also to help get that transition of MMA over to the mainstream sports fan because there is still that perception out there that MMA is just a bunch of guys beating the crap out of each other. And really it's not. It's guys that are educated. It's a sport. These guys are athletes.

"We just put the concept together, and we thought what a great place to start it out here in Santa Monica."

"Andre Galvao, who is a seven-time world Brazilian Jiu-Jitsu world champion, is making his MMA debut," Weiner said. "He was tough to find a fight for. Everyone is talking smack that they'll fight him. When it came time to sign, no one wanted to sign to fight him."

No one except Metcalf.

"Coming up in his career, he took a couple fights in a higher weight for a good payday on short notice. And he's a guy that is not boring. He's a tough fighter, so this has turned into almost a coin-flip fight."

The opportunity to help the Shriners Hospitals was also enough to encourage the Zuffa-owned WEC to offer up a few of their fighters for the evening.

"We were talking to the WEC, and they said, 'Have [Bryan Baker] fight (Gary) Padilla because if you don't put it on, we'll put it on later in the year,'" Weiner said. " So they threw us a bone, which is great. And they're all going to be at the show."

UFC veterans Kyle and Ruediger will also be in action against local competition.

Weiner said the event could be the first of several organized by the Shriners.

"We're going to become a little bit of a traveling show and doing different cities for the Shriners where they've got good Shrine support or a hospital," Weiner explained. "So we're looking at maybe even three or four a year in different parts of the country."

Tickets are still available for the event and run from $45 to $280. Proceeds go toward the Shriners hospitals.

The Shriners of North America have approximately 375,000 members in 191 chapters in the U.S., Canada, Mexico and Panama. The first hospital was built in 1922. Since that time the group has assisted more than 865,000 children.

This story, written by John Morgan, was produced by TAGG Radio (www.taggradio.com) specially for MMAjunkie.com (www.mmajunkie.com). The show -- which is hosted by fighter/broadcaster Frank Trigg, Gorgeous George and ace producer Goze
Posted by Unknown at 10:15 PM