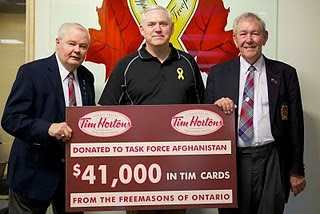 It is with a great deal of pride that I attach this photo that shows the culmination of Masons in Ontario effort to support our Troops with the “Coffee For the Troops” Campaign.

All Masons from across the jurisdiction are delighted with the results and agree that each and every contribution has made a difference.


The photo credit is as follows:

SUPPORT FOR OUR TROOPS – Ted Williams (left) and Bill Eastwood (right) formally presented a donation of $41,000 from Ontario’s Masons to provide coffee cards for Canadians serving in Afghanistan to Brigadier-General (Ret’d) David Martin, CEO of the Canadian Forces Personnel Support Agency. The Masons have also established a Masonic Lodge in Afghanistan, a branch of Trent Lodge in Trenton. The presentation was made Monday in Ottawa. (DND photo by Lyndon Goveas)


This photo will soon appear on the Grand Lodge website and hopefully in a large number of regional newspapers across the province (thanks to the efforts of the Grand Master’s media officer Alan Arbuckle). It has also been submitted for the next issue of the Ontario Mason magazine.


Congratulations to any and all who have played a role in making this project a roaring success.


Garry Dowling
Posted by Unknown at 11:00 AM