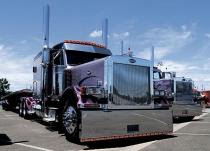 
While standing on asphalt in the hot sun, Victor Maestaz grabs a can of air and a brush and uses them to clean out the cab of his semi-truck. He is scrubbing every inch of his tricked-out truck in preparation for Galt's 10th annual Cool Truck Show.

The 150 to 200 trucks are a rainbow of colors and have a variety of custom details. One has a bulldog in a leather jacket and American flag-studded collar as a hood ornament, while Maestaz's truck has a bell behind the sleeper that is operated by air. He usually rings it when kids ask him to honk his horn.

Maestaz, who is from Las Vegas, has also made the frame of the truck longer, added a new sleeper to it, and installed Iron Cross gas and brake pedals.

But even though Maestaz's truck has fun details, he takes his job seriously.

"It's in our blood; that's what we do. Instead of building hot rods, we build trucks. It's an addiction," Maestaz said.

The event promoter, Bob Hitchcock, made a similar comparison.

The show has grown over the years, and now even has truck enthusiasts who come from as far away as Australia, Hitchcock said. The show is being held today and Sunday at the Galt Market, and includes a light show during which the trucks turn on neon glow lights and LEDs when it gets dark.

The event will also include an announcement from Intel about a new hybrid technology for diesel engines, Hitchcock said.

The $4 admission fee for adults goes to Shriner's Hospital for Children, the California Colorectal Cancer Coalition, and the Galt Parks and Recreation scholarship funds. The groups have booths at the event, and the colorectal nonprofit will be encouraging trucking enthusiasts to get screened for cancer.

Having been in the business his whole life, Maestaz said he likes going to the shows to catch up with his trucking friends. But the true recognition of his work is when he is on the road and people give him a thumbs-up or take pictures.

Across the market grounds, Ray Rodriquez works under his big rig. Purple flames stretch across the side of the semi-truck and stand out against the shiny black paint.

He works in Salinas, and said it is important to have a truck that he wants to be in every day. It took him four years to plan out the changes he was going to make, but only 90 days to actually make them.

One of the main reasons the industry started putting on truck shows is to improve the image the American public has of the trucking industry, Hitchcock said.

"Most people have never been this close to a truck, except passing them on the freeway, and it scares them," Hitchcock said.

As a third-generation trucker, John Silva, of Chowchilla, has custombuilt two big rigs. His has a red truck with Iron Crosses at the corners of the flat beds. He even had a renowned stenciler add artwork to the truck.

He remembers going with his dad into town to have his semi-truck worked on.

"It's cheaper to work on it yourself, or have your kids work on it," he said.

Contact reporter Maggie Creamer at maggiec@lodinews.com. Read her blog at www.lodinews.com/blogs/citybuzz.
Posted by Unknown at 10:31 AM