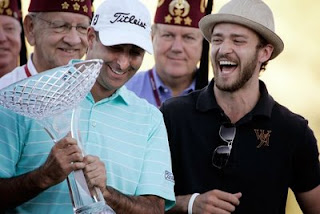 As play concluded Sunday at TPC Summerlin, it was all smiles from the management team of the Justin Timberlake Shriners Hospitals for Children Open.

Blessed with perfect weather all week, a golf course that was in immaculate shape and a solid field that put up low numbers, the tournament believes it is on solid footing for 2009 and beyond.

"The feedback from the players has been strong," tournament director Mark Gardner said. "Between the new format, the track, having Justin, everyone's happy with the new look."

Gardner said attendance was up between 10 and 20 percent, though final figures weren't available Sunday. But with more people on the grounds, Gardner said the tournament has something to build on for next year.

"I think all the pieces are there," he said. "We just have to fine-tune it. We want a full celebrity field next year, and now that we've had a year to work with Justin and his people, we believe we'll have a stronger field next year."

Gardner, chairman Gary Davis, Timberlake's staff and members of the Shriners will meet with PGA Tour officials next week to discuss the event and begin work on the 2009 tournament, which will remain in the Fall Series during mid-October.

Tournament winner Marc Turnesa
• HERRON'S HOT HAND -- Lots of low scores were posted during Sunday's final round, and Tim Herron's 10-under-par 62 was the day's best and equaled the low round of the week shot Thursday by Zach Johnson and Marc Turnesa.

Herron, who finished with a 21-under 267 for the tournament, started the day 10 shots behind Turnesa. He took full advantage of the perfect conditions to shoot the second-best round of his career. He shot a 61 in 2003 at the Bob Hope Desert Classic.

"I just wanted to hang in there today," said Herron, who finished tied for sixth place and earned $142,475. "I knew there were a lot of birdies out there. (Sunday) I took advantage of some good breaks."

• PAINFUL DROP -- Ryan Moore's unbelievable finish at No. 18 Sunday, where he took a nine on the par-4 hole, not only hurt his pride, it put a big dent in his bank account.

Had Moore parred the hole, he would have earned $196,800 as part of a projected four-way tie for third that included Chad Campbell. But with his nine, Moore finished tied for 24th, and his paycheck was just $29,058.

• NO REPEAT -- Defending champion George McNeill didn't duplicate his winning effort from last year and finished tied for 15th place with a four-day total of 270. McNeill had his worst round of the tournament Sunday, finishing with a 3-under 69 after three consecutive rounds of 67.