Shriners get racing to help youngsters 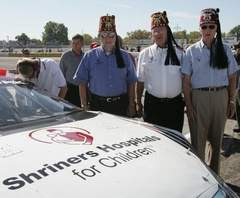 It was all for the children when a special Shriners Hospitals for Children-themed race car was unveiled Sunday by NASCAR driver David Ragan during the 2008 season finale for the ARCA REMAX Series at Toledo Speedway.

"I couldn't think of a better way to tell the world about this amazing organization than to display their name on my helmet and car," Ragan said.

In addition, he wore the specially designed Shriners Hospitals for Children helmet that he first wore in the NASCAR Sprint Cup Series Kansas 400 on Sept. 28. After Sunday's race, Ragan autographed the helmet, and it will be auctioned on eBay from Dec. 15-21 to benefit the hospitals.

Also for sale soon will be a special edition - with only 2,500 made - die-cast car, modeled after the Shriners Hospitals race car and autographed by Ragan.

To bid on the helmet or purchase a die-cast car, go to Ragan's Web site, www.davidragan.com or the Shriners Hospitals Web site, www.shrinershospitals.org.