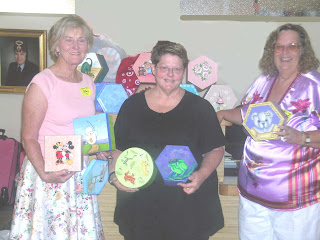 
Los Angeles, CA – October 13, 2008 – The South Bay Folk Artists, based in Redondo Beach, California, recently delivered fifty hand painted treasure chest boxes to the patients of Shriners Hospitals for Children in Los Angeles. According to Christine Ingram, editor of the group’s newsletter, the South Bay Folk Artists began meeting in 1983 and are affiliated with the Society of Decorative Painters. Folk art is often described as a wide range of objects that reflect craft traditions and traditional social values of local social groups. Chris was one of three members of the group that travelled from Redondo Beach to the hospital in Los Angeles to deliver the boxes.
Anna Peirera, Manager of the hospital’s Child Life and Recreation Therapy Department stated, “Our patients loved the cartoon characters and the bright colors of the boxes.
Posted by Unknown at 11:15 AM