With all the foundations and charities out there, why Shriners? 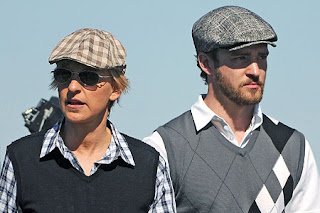 Ellen DeGeneres, Jessica Biel and Luke Wilson were among the celebs putting in their time on the green for the Justin Timberlake Shriners Hospitals For Children Celebrity Pro-Am golf tournament in Vegas on Wednesday. Wow, that's a mouthful! But it's all for charity, so that's good.


JUSTIN TIMBERLAKE: Well, to be honest, this last year has been a really cool experience for me to learn more about the Shriners. I didn't know as much as I do now, obviously. They got involved with the tournament before I did.

In the process of that, before we actually decided if we were going to do it or not, the Shriners got involved. So I started learning a little about them, and I met the ambassador. I Hope you get a chance to meet her. Her name is Katie. She's 18 or 19 years old, and first time I met her, I immediately got to see the effect of what the Shriners Hospitals do.

we were out at Rivera Golf Club in Los Angeles, and they brought Katie out. She's got a prosthesis. I think her left leg is a prosthesis. She played a whole round of golf with me.

I was just, you know, really moved, really inspired to see someone that young that obviously doesn't have the amenities that we have, and that it just didn't change anything about her, her life. That she's living her life exactly the way she wants to.

You know, when you see something like that, someone who doesn't have a choice, someone who is born less fortunate and see what the Shriners Hospitals is able to do for her. I got to see the immediate effect of that.

I started learning more about it, and it's a wonderful, wonderful organization. I think since I've been in the business, which it's kind of weird to say 10 to 12 years. I'm a seasoned vet (laughing.)

Being in the business this long, even in the group, in InSync and now moving forward in a solo career, I've always been involved with philanthropy, specifically for children.

So to me, when the Shriners Hospitals for Children got involved with the Vegas tournament, this all just became a no-brainer.
Posted by Unknown at 5:37 PM