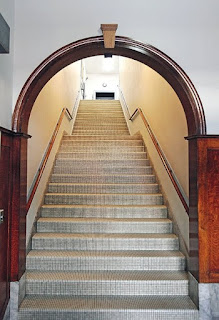 Nine Masonic organizations meet regularly at the historic 10th Street lodge in Downtown Boise.
Local Masons built it in 1906, making it a contemporary of St. John's Cathedral and the Turnverein Building, at 6th and Main. The fraternal organization expanded the building in 1920.
If you ever have the chance to view the building from the upper stories of the Empire Building next door, you'll see that the Masonic Lodge's roofline clearly shows two separate structures, which isn't evident from street level.
The building's charms are numerous and include a swamp cooler built in New York City in 1913, known affectionately as "Bertha." Bertha still works, thanks to regular oiling. A vault holds the sepia-toned photographs of lodge leaders from the turn of the last century.
The lodge once had a live-in custodian. His tiny apartment remains, uninhabited, on the top story. The basement held an armory during World War I.
The community has used the lodge for various purposes over the past 90 years: funerals, fundraisers, polling during elections, and once, a bazaar featuring a palm reader named "Queen Grizzella."
City historic preservation officials say the lodge is significant because it has been in constant use, under one owner for nearly a century. Many of Boise's pioneers were Masons, making the building an important part of the city's early era.
The 10th Street lodge is the Masons' fourth meeting place in Boise. The original temple was an adobe building at the corner of 7th and Idaho.
According to the Grand Lodge of Idaho website, there are about 4,000 Masons in the state today. Some historians say Freemasonry is the world's oldest fraternal organization, dating back to the late 14th century.