2013 Shrine Bowl enlightened Decker & Murray more than the game itself
By Jane White
KEARNEY — Even though the scoreboard showed the North defeating the South at the end of the 2013 Nebraska Shrine Bowl Football Classic Saturday, the Shrine Bowl game is one event where everyone involved comes out on top.
The North won the game 9-3 at the University of Nebraska at Kearney's Foster Field, but a full week of activities promoting and supporting Shriners Hospitals for Children left both teams' players and coaching staffs in the "winners" category.
In the game, the South took the early lead as Beatrice's Zach Decker kicked a 29-yard field goal with 1:01left in the first quarter.
The field goals were set up when the South recovered a North fumble.
The North tied the game in the second quarter as Norfolk Catholic's Jordan Bellar connected on a 33-yard field goal.
Neither team scored again until Millard North quarterback Isaac Aakre hit South Sioux City's Nate Rogers with a 21-yard touchdown pass in the final period. The PAT kick failed, leaving the score at 9-3.
For both Decker and Norris' Terrill Murray the true meaning of the Shrine Bowl hit home long before the final seconds ticked off the game clock.
Decker, who was listed as a defensive back, as well as a kicker and punter, for the South team, and Murray, who played defensive end, joined the South team a week earlier at Doane College in Crete for the start of camp.
Both players were excited about their opportunities heading into the eight-day event.
"It's a great honor to be part of the Shrine Bowl," Decker said. "The coaches nominate you for not just your athletic ability, but also for your character and that's what I've been working for all my life."
"I was really excited and happy to support this really good organization and to represent my school,"Murray said.
Decker said he'd talked to previous Shrine Bowl players from Beatrice about their experience.
"They said it was probably the best thing they've experienced in their whole life," Decker said.
Both Decker and Murray had high expectations when it came to the camp.
"They put on the perfect camp for us," Decker said. "It was a perfect week for us."
Murray said he didn't realize initially how "big" of an event the Shrine Bowl was.
"I didn't realize how big it actually is and how important it is for these kids," Murray said. "It's a really good deal."
After checking in Saturday, the players were treated to a family picnic that night.
The teams started working out Sunday, scrimmaged Monday and had more practice sessions on Tuesday.
Wednesday, both the South and North teams traveled to Shriners Hospitals to see what the proceeds from the game go toward. The South team flew to Chicago, while the North west to St. Louis.
Thursday was media day and more practices.
On Friday, the teams traveled to Kearney, and Saturday brought the annual Shrine Bowl parade and then the game.
"We've been really busy and working hard," Murray said.
Wednesday's trip to Chicago was the highlight of the week for the players.
"We got to go to the Shrine Hospital and it was a really cool experience," Murray said.
Murray said players had a chance to tour the hospital's facilities, which were impressive.
"We also got to meet some kids and see what they have to go through," Murray said.
Decker said he was "shocked" by the arcade and recreational facilities at the hospital.
"They have an arcade room," Decker said. "We also played wheel-chair basketball with a couple of the patients there.
"I was shocked how good they were."
What Decker learned about the patients, however, went beyond their gaming skills.
"Their attitude about everything is so positive," Decker said. "That's something we need to see and be more positive and not negative."
Murray said the Chicago trip changed his attitude about playing in the Shrine Bowl game.
"It made me want to work harder for these kids," Murray said. "We know what we're playing for now."
While Decker said he "knew" he'd be playing for the Shrine Hospital patients, the trip brought that point home.
"Those kids would do anything to play on this field," Decker said. "We're blessed to be out here playing for those kids."
Both Decker and Murray said they will take lessons earned during the Shrine Bowl week with them as they continue on.
Decker will be going to Morningside College in Sioux City, Iowa, this fall and playing football for the Mustangs. He plans to major in business administration.
Murray is headed to the University of Nebraska-Lincoln to study electrical engineering. He said the fact he's not playing football in college made the Shrine Bowl game even more special. 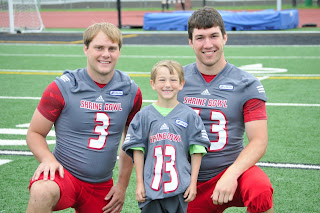