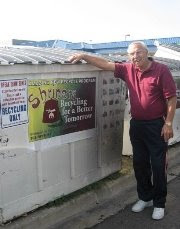 Herb Stewart poses next to the Shriner recycling bins.

Lakewood resident Esther Copeland believes in doing her part by recycling. When she heard about a nearby location that would take items that her curbside pickup would not, she decided to check it out.

"I want to recycle more, and this is a convenient location," said Copeland, who lives in the Westgate neighborhood. The recycling bins are location near the Wal-Mart at 7900 W. Quincy Ave.

One day when Copeland was dropping off some items, she met Herb Stewart, who was closing the lids and tidying up the recycling area.

"I told him, 'Thank you for doing this,'" Copeland said.

The recycling program is run by Shriners from the El Jebel Shrine, and Stewart has been involved with the program for about 12 years, he said.

Stewart, a Littleton resident and retired teacher, takes care of the bins within the Littleton area. The Wal-Mart location is his largest, with 14 bins, and he has about 70 bins throughout Littleton.

All proceeds from the recycling program benefit Shriners Hospitals for Children, Stewart said. He recently went with a group of Shriners to visit one the Shriner hospital in Salt Lake City and said it was a very touching experience.

"When the bins are full, it's exciting for me, because the profit goes to the hospitals," he said.

About 38 Shriners are involved with the program and meet once a month, Stewart said. There are locations all throughout the metro area.

Copeland said she wants to get the word out about the program because of the benefits to the community as well as the hospitals.

"I want to convince my friends who don't recycle at all to start," she said. "I truly believe that, in this day and age, if we all did our part we'd have far less problems."
Visit http://eljebelshrine.org/recycle.htm for a complete list of locations
Posted by Unknown at 5:27 PM