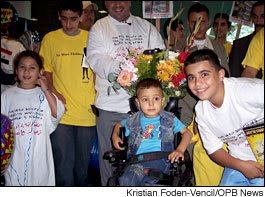 By Kristian Foden-Vencil Portland, OR September 10, 2008

A six-year-old Iraqi boy, who lost a leg in a missile attack four years ago, arrived at Portland International Tuesday.

He’s here with the hope of getting a prosthetic leg and correcting other medical problems. Kristian Foden-Vencil was at the airport to greet the boy's flight and files this story.

About 60 people, carrying everything from toy helicopters to stuffed animals, gathered to welcome Mustafa – a boy they’ve never met.
They carried signs and wore yellow T-Shirts saying "Ask me about Mustafa."

Zhaha Hassan, a Palastinian American, brought a toy racing car and her 5-year-old so Mustafa could have a friend.

Zhaha Hassan: “I really wanted to welcome Mustafa and his father into the community another well wisher, Muhammed Baghdadi, of the ‘Iraqi American Community of Portland,’ says he’s working to find Mustafa’s father an apartment for the stay, as well as a cell phone. Baghdadi says helping Mustafa is a drop in the ocean.

As Mustafa and his father came out of the gate spontaneous applause erupted and they flocked around the pair.

After pictures and a gift exchange, Mustafa’s father Ahmed was asked what it’s like to get such a welcome.

Ahmed's Translator: “He said: I’m very happy to be in the place that I need to be in the most to help my son.”

Abed and his mom were returning from a visit to a medical clinic near Fallujah in 2004 when they were caught in the attack.

Mustafa’s injuries mean he needs a colostomy bag and he's missing his left leg from the hip down. Ned Rosch, of the charity ‘No More Victims,’ helped organize the visit.

Shriners Hospital and local doctors and nurses are volunteering to fit Mustafa with a prosthetic leg -- and to perform diagnostic surgeries to see if the colostomy can be reversed, allowing him to move his bowels normally again.

The hospital has also offered to fit a new leg every two years until he’s fully grown. Rosch says helping Mustafa is the primary goal.

Mustafa is the first child ‘No More Victims’ has helped in Oregon. About a dozen other kids have been looked after by other medical communities around the country.
Posted by Unknown at 3:15 PM